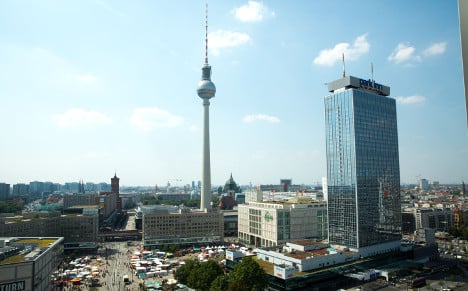 50 years ago this week, the first foundation stone was laid for the Berliner TV Tower (Fernsehturm).

The tower would soon become the tallest building in Germany, and was intended to be a symbol of the city. Plans for its construction had actually begun some decade before – but things hadn't gone quite as expected.

Where to build the Tower?

“The TV Tower is one of the most visited attractions in the city, and draws more than one million visitors each year” said Christian Tänzler, spokesperson for tourism website Visit Berlin.

The 50th anniversary is a particularly good time to champion this “touristic heavyweight,” he told The Local – and to emphasise its huge importance within the city.

Intended to represent the power and efficiency of socialism, the tower was to be built on the Müggelberge – a wooded area in Berlin's Treptow-Köpenick quarter.

However, after the first few outbuildings were built on this site, the Ministry of Internal Affairs realised something: the Fernsehturm would be directly in the flight path of Berlin's planned Schönefeld Airport.

After the Berlin Wall went up in 1961, Volkspark Friedrichshain was also aired as a suggestion – but this time, it was the cost that halted plans.

A potential spend of 30 million Ostmarks just wasn't feasible in this time of economic crisis, the East German government decided.

Meanwhile – and completely unrelated to the tower's planning – GDR leaders had just demolished the Berlin Palace, former residence of the Kaisers of Germany, and needed something to replace it.

The plan was to build a kind of “Government skyscraper” in the city centre, but the plans were rejected.

However, something magnificent came about when these two rejected plans were merged.

On 4 August 1965, the first stone was laid for Berlin's iconic Fernsehturm – not at the Schlossplatz, where the government had dreamed of creating an architectural masterpiece, but just next to nearby Alexanderplatz.

“Well, Comrades, there one sees it exactly: it belongs there,” said SED leader Walter Ulbricht, according to a popular anecdote.

He stood before a model of Berlin.

It was 1964, and Ulbricht had apparently just determined where the Fernsehturm was going to stand.

In reality, it was more likely the sandy soil around Alexanderplatz – a much better foundation than the riverside marshy earth at the Schlossplatz – that sealed the deal for the Fernsehturm's final location.

Construction finished in 1969 – and on October 3rd that year, Berlin's Fernsehturm opened its doors to the public.

Despite its original aim of highlighting the power of the GDR, the tower has come to symbolize a united Berlin since reunification in 1990.

With a height of 368m, the Fernsehturm is Germany's tallest building – and is also one of Berlin's most distinctive landmarks.

Jeremy Minsburg leads custom-made tours around the city for visitors to Berlin through the website The Berlin Expert.

A Jewish American, he has lived in the city for 14 years.

“My clients all love the TV tower,” he told The Local.

Minsburg said that visitors love hearing about how in the GDR era, the Fernsehturm's revolving restaurant took an hour to fully rotate, but after recent renovations now takes just 30 minutes.

“Communism vs. capitalism,” he jokes.

Visitors are impressed by the tower's “funky” design, he said – with many claiming that the Fernsehturm “looks like a piece of asparagus!”

Tänzler explained that while the Fernsehturm has been modernized since its construction to keep up with increasing demand, “its visual appearance has – thank goodness – not changed.”

“Both the exterior design and the tower's interior have become design icons for Berlin,” he said.

The Fernsehturm is now owned by Deutsche Telekom, and open seven days a week to tourists.

After a 40 seconds elevator ride – or a trip up the tower's 986 steps – visitors enter the sphere.

Here, the tower boasts a 203m high viewing platform and a restaurant 270m above the ground.

Offering what the tower's website advertises as “an incomparable view of the capital,” the sphere allows visitors to gaze upon Berlin in a way that, 50 years ago, planners could only dream of.