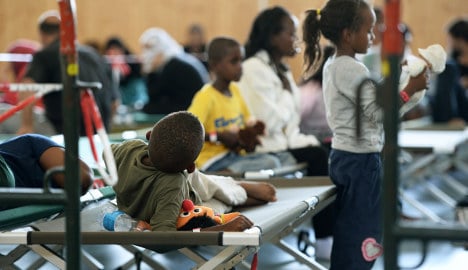 Refugee children housed in a gym in Bavaria. Photo: DPA

“If I were to sit here and say publicly, 'I think Germany should take in economic refugees too'… I would get a flood of hate comments,” Reschke said at the opening of her editorial on the Tagesschau evening news programme.

“Until recently, such commentators were hidden behind pseudonyms. But now such things are being published under real names.

“Apparently it's no longer embarrassing – on the contrary, for phrases like 'filthy vermin should all drown in the sea,' you can get excited agreement and a lot of likes. If until then you were a little racist nobody, of course you suddenly feel great,” Reschke said.

Posted by tagesschau on Wednesday, August 5, 2015

While some people are now being prosecuted for online hate speech, Reschke argues that the public can't simply leave it to the authorities to restrict extremist views to the fringes of public discourse.

“The hate commenters must understand that this society won't tolerate this… If you're not of the opinion that all refugees are freeloaders that should be hunted down, burned up or gassed, you should announce that clearly.”

The clip of Reschke's commentary was shared over 65,000 times on Facebook, and while many commenters were supportive, others made the very points that she had warned against, accusing refugees of being lazy, ungrateful, not really in need or drug-takers.