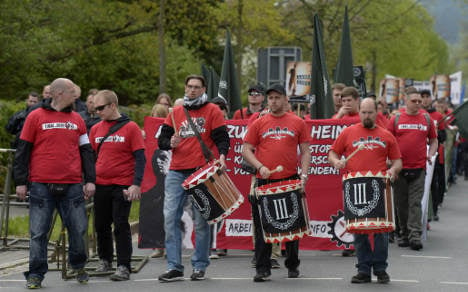 The Third Way marching on May 1st in Thuringia. Photo: DPA

Talking to public broadcaster ARD on Tuesday, Hans George Maaßen, head of the Federal Office for Protection of the Constitution (BfV), said that the far-right group called The Third Way had the potential to escalate violence against refugees.

“We have already seen that their agitation, their condoning of violence and their praising of aggression are encouraging further acts of violence.

“We are concerned that not only refugee homes but also actual people will be hurt,” said the spy chief.

Prosecutors in Ingolstadt in Bavaria have already found evidence that links The Third Way to an arson attack against a refugee home in the vicinity of the city that took place in July.

They have described the evidence as “relevant to investigations“ but are reluctant to speak further while investigations continue.

ARD's research shows that in the lead-up to the attack The Third Way distributed flyers inciting hatred against asylum seekers.

The far-right party described another attack as an “early Christmas present” on its website.

But a spokeswoman for the BfV told The Local that The Third Way are careful to distance themselves from the arson attacks.

They “create the atmosphere” she explained, but “until now we have not found evidence to show that they organised the attacks.”

“We see many nasty comments on the Internet, but the Third Way are careful not to have anything that implicates them on their website,” she said.

“As unappetizing as what they do is, they are using their right to freedom of expression and as such their behaviour is protected by the constitution.”

Strong in the southwest

The Third Way was founded in Heidelberg, Baden-Württemberg, in 2013 as the successor to an earlier neo-Nazi Party, the Freies Netz Süd, which was shut down by police earlier in the same year.

On its website the Third Way outlines its goals in a ten-point plan.

Point number four calls for “the protection of the homeland“ against “foreign domination“ and “continuous misuse of the asylum system.”

Point 10 claims that Germany is larger than the Federal Republic (its current borders). Their goal is the “peaceful recovery of the whole of Germany in its rightful borders.”

At this stage the party remains small and peripheral.

It exists almost exclusively in the southwest of the country with a few points of influence in Thuringen and Saxony, the BfV spokesperson said, adding that “they have no chance of winning representation at the national level.“

But, according to Die Zeit, the party has plans to compete against the more established far-right National Democratic Party (NPD) and are hoping to expand their presence into former east German states, traditional strongholds of the neo-Nazi scene.

On May 1st at least 70 of their members marched in Saalfeld in Thuringia. During the march three young men from the left-wing scene were attacked and were seriously injured.

The Third Way hope to present themselves as a radical alternative to the NPD, defining themselves as “national revolutionaries“ Die Zeit reported in February.

Although The Local tried to contact The Third Way for comment, they had not responded by time of publication.