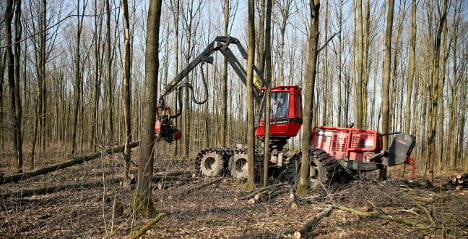 The woodsman was out with the 31-year-old groom, his fiancée and their two children when the accident happened, reports Münchner Merkur.

He was treating the children to a trip in the 'Harvester' – a timber harvesting vehicle – in a forest on the border between Thuringia and Saxony-Anhalt.

The children, aged seven and nine, sat in the Harvester with him while their parents waited in the car.

It was supposed to be a family day out before the pair's wedding this weekend.

As the 12-tonne Harvester left the forest path, it collided with the parents' car.

The children's mother managed to escape the vehicle at the last minute – but the father and groom-to-be was trapped in the passenger seat as the car was crushed.

He was pronounced dead at the scene.

Police are continuing to investigate how the incident happened, with a police spokesperson describing the case as “particularly tragic.”

The man's fiancée was unharmed, while the best man was taken to hospital after the collision.

The family is receiving counseling from psychologists.