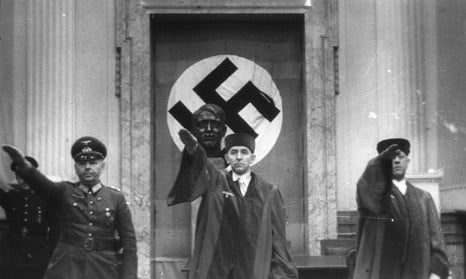 After the end of Nazi domination 70 years ago Germany reformed its laws and legal systems to erase the repressive rules established by Hitler’s administration and to prevent any similar movements from coming to power in the future.

But some of the smaller legal details first penned by Nazi officials still remain today. In particular, the criminal code descriptions of murder and manslaughter were written in 1941 by Nazi lawyer Roland Freisler, and parts of the original text still remain today.

The code on murder states that “a murderer is someone who kills another person because of bloodlust, sexual gratification from killing, greed, or otherwise base motives.”

The description of manslaughter states that “someone who kills a person, without being a murderer, will be punished as a manslaughterer”.

German daily Die Welt pointed out that these descriptions define a person who commits a crime as an essentially criminal person, as being at their core a murderer, rather than simply describing the criminal action by itself like in other sections of the code.

For example, the section describing assault states that “a person who physically mistreats or impairs the health of another person will be punished with up to five years in prison or with a fine”.

Justice Minister Heiko Maas wants to reform these codes so that they no longer reflect the ideas of the Nazis, Die Welt reported on Thursday.

Germany needs “modern laws that are free of the language of the Nazis,” Maas said, according to Die Welt.

The murder and manslaughter codes were updated after the Nazi era to replace the original death penalty sentence for murder with life in prison. Still, some argue that the blanket typology of murderers in the code may impact trials and not leave room for flexibility.

A commission of experts wrote a 900-page recommendation paper on revisions to the code about a month ago, expressing the need for a reform that more directly describes the criminal act rather than the perpetrator’s character.

“There is prevailing agreement that the legislature should replace the terminology used in the laws regarding death-related crimes to describe a perpetrator’s typology with language linked to the criminal action,” the recommendation paper stated.

Courts have softened the life in prison sentence in certain cases, such as when a woman has been abused for years by a spouse and feels she has no other option but to kill him.

Maas has received support for his plans from both the German Bar Association and the Central Council of Jews in Germany.

But the reforms face difficulty in being realized because they were not included in the German Parliament coalition agreement among the governing parties.

Members of the conservative sister parties the Christian Democratic Union (CDU) and the Christian Social Union (CSU) have said the changes are not a priority given other issues facing the country.