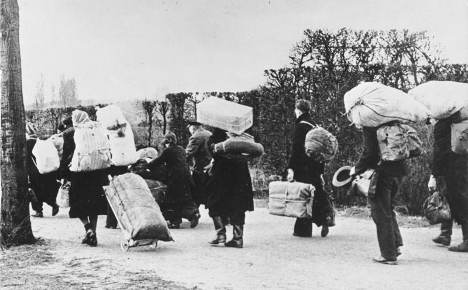 The explosion happened in the afternoon of July 31st, 1945. Around 27 people were killed, including seven Czechs.

World War II had ended just weeks before – and Czechoslovakia had begun to forcibly expel over two million Sudeten Germans who lived in the country.

So when the explosion happened, rumours quickly spread that the Germans were responsible.

What followed was a massacre.

All ethnic Germans had been forced to wear white armbands, making them easily recognizable – and on the day of the explosion, German men, women and children were mercilessly beaten and killed.

Some were shot dead. Others were thrown into the River Elbe and then shot at while they tried to swim to safety.

Part of the “fierce expulsion”

Those responsible for the massacre were Revolutionary Guards (a post-war Czech paramilitary group) alongside Soviet and Czech soldiers, as well as around 300 Czech civilians who had just arrived from Prague by train.

Mayor Josef Vondra tried to help the victims, as did many local Czechs. But the death toll continued to rise.

In the aftermath, the event was shrouded in controversy.

With an estimated 75,000 Czech citizens having been killed in forced labour camps under Nazi rule, Czech officials were unwilling to commemorate the Germans who lost their lives.

“This was a time of continental ruin,” explained James Mayfield from the Institute for Research of Expelled Germans, “and [with] no tribunals to prevent war crimes or local violence.

“Over 50 million had died in the war anyway,” Mayfield told The Local, “so the lives of 2,000 to 5,000 Germans at Ústí nad Labem were seen as largely insignificant.”

The massacre was part of something much wider, Mayfield said – and what happened in Ústí was “only one of many violent examples of what historians and German expellees call the wilde Vertreibungen (fierce expulsion) of Germans from countries such as Czechoslovakia.

According to Mayfield, local vigilantes ignored instructions from Allied powers to make the expulsions as “orderly, humane and non-violent as possible.”

Ten years ago, former Czech foreign minister Cyril Svoboda unveiled a memorial plaque on the Aussiger Bridge over the River Elbe, where part of the massacre occurred.

“In memory of the victims of the violence of 31st July 1945,” it reads in Czech and German.

A decade on, the bridge is the scene of further remembrance.

Organized by the Association of German Citizens in the Czech Republic, a special ceremony took place this Friday to commemorate the victims of the massacre.

As in previous years, Sudeten German Association chairman Bernd Posselt travelled to Ústí for the service.

Yet the ceremony was particularly important this year, Posselt told the Local, as for the first time, Czech politicians would be in attendance.

The service began at 3:30pm and was attended by current Ústí mayor Věra Nechybová, as well as members of German minority groups in the town.

There was also a remembrance service in the street at 1pm, to commemorate those killed in the original explosion.

And at 6pm, a church in the town will hold a special mass for the victims.

Czech-German relations since the massacre

The massacre divided the two countries for decades – with ongoing controversy as to why exactly it occurred.

The Czech government have since claimed that they were unable to stop massacres such as the one in Ústí, Mayfield said.

However, he argued: “all historical evidence suggests that most locals, government officials, and particularly the communist party were widely aware of the massacres.”

“They either supported limited reprisals against the Germans, looked the other way, or even provided intelligence and names of German families.”

Since the German expulsion from Czechoslovakia, the Czech government has refused German calls for compensation for these refugees – several thousand of whom died in the expulsion.

But in 1997, the German-Czech Declaration was founded.

The agreement saw both sides state that they would “not allow past legal and political issues to be a burden” on the relationship between the two countries.

“The 1997 German-Czech Declaration paved the way for Germany and the Czech Republic to become present-day friends and partners, duty-bound to uphold human rights, freedom and democracy,” a spokesperson for the German Foreign Ministry told The Local.

“Despite the many cases of massacres and forced dispossession, it would be inaccurate to describe the expulsion of the German minority of over 3,000,000 from Czechoslovakia as genocide or extermination,” said Mayfield.
“It was, instead, when combined with the expulsion of over 7,000,000 ethnic Germans from the rest of Eastern Europe, the largest and most organized ethnic cleansing in modern history.”
Reporting by Hannah Butler

A quote in this article was updated at the request of James Mayfield.