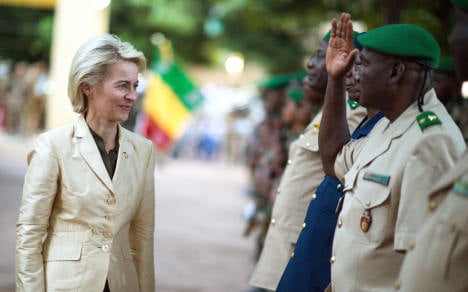 The mission will be commanded by Brigadeer General Franz Pfrengle who will oversee 600 soldiers from 24 different European states. Of these 160 are from the Bundeswehr.

The north of Mali was thrown into chaos in 2012 by an attempted coup when Islamists and Tuareg rebels seized power in the desert region.

In 2013, France, the one-time colonial power in the country, sent troops into Mali and was able to establish control at the cost of the rebels groups.

A month ago the Malian government agreed upon a peace deal with the most important rebel factions, leading European politicians to believe that progress is being made towards a sustainable peace.

Von der Leyen spoke on Monday evening about a decisive phase on the road to stability and peace after conducting her first discussions in the west African state.

“We know what is at stake,” she said after a meeting her Malian counterpart Tieman Hubert Coulibaly. “We have the chance to create an anchor of stability here if we succeed.”

The Defence Minister also made clear that more stability in Africa can dampen the influx of refugees into Europe.

“Nothing can prevent people from making the life-endangering journey to Europe like the fact that in their land there is hope for a better future,” she said.

The EU training mission began in spring 2013. Since then it has trained more than 5,000 Malian soldiers. Up until this point Spain has had control of the mission.

There are also more than 10,000 UN soldiers and police officers stationed in the country, who have a decidedly more dangerous job. Since April 2013, 42 UN soldiers have been killed and 166 have been injured.

The Bundeswehr is providing seven soldiers to this mission who are stationed at the headquarters in the capital Bamako.