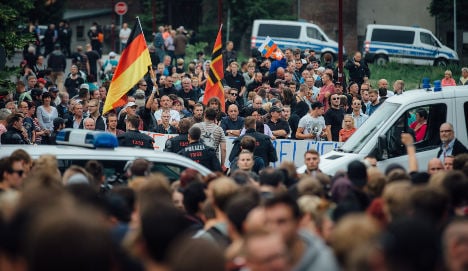 Right-wing protests in Freital on the outskirts of Dresden in June. Photo: DPA.

Michael Richter, chair of the Linke (Left Party) in Freital on the outskirts of Dresden, told news site MOPO24 he believed the far-right were behind the attack.

“I have organized the pro-asylum seeker events in the town,” he said. “I'm right at the top of the hit list.”

So far there is no concrete evidence linking far-right groups to the crime, with police only confirming the explosion took place at around 12.45am on Monday morning. Officials are currently investigating the crime scene.

Richter, who had already received several death threats before the attack, was awoken in the night by the explosion in front of his house.

The blast was strong enough to damage cars several meters away from Richter's Volkswagen Polo.

Freital has become synonymous in Germany with right-wing extremism in recent weeks due to anti-immigration protests which have taken place in the town.

In June, 160 demonstrators tried for three days to prevent refugees from entering a hotel they are being housed in in the town.

Spiegel reported that they were chanting “Criminal foreigners – out, out, out!”.

In early July anti-refugee protesters took over a town hall meeting with angry locals claiming money was being wasted on asylum seekers.

Freital is situated on the outskirts of Dresden which is the birthplace of the Pegida movement, a xenophobic organization which claims to be fighting against a Muslim take-over of the West.

At its high point at the start of 2015, Pegida was bringing 20,000 people onto the streets for its weekly marches.

The association “Dresden without Nazis” said on its Facebook page that “Michael Richter, as one of the faces of the Organisation for Acceptance and Tolerance, has worked for months in Freital against the hegemony the Nazis have on the streets – We stand in solidarity with Richter.”

Refugees suffered attacks in Brandenburg Dresden and Thuringia over the weekend, as a recent pattern of attacks on refugees and their housing in eastern Germany continued.

A refugee family with two young daughters aged two and five awoke to a fire in their apartment in Brandenburg an der Havel on Saturday night. Someone had doused a newspaper in fire accelerant and thrown it at the family's front door.

The 24-year-old mother first smelled something burning and woke her 27-year-old husband, who was able to put out the flames.

Police said that the perpetrator must have come through the front entrance of the apartment building, which was open, and was able to escape undetected.

In Dresden, a group of 27 people attacked a refugee home with stones. Police were able to identify the suspects shortly after the attack.

On Friday four Syrian asylum-seekers in the Thuringian town of Greiz were injured when, according to their account, a group of young men attacked them and started beating them up. Police arrested three people aged 18, 23 and 26. Officials said they did not rule out that the attack was motivated by xenophobia.

A demonstration by the far-right National Democratic Party's (NPD) supporters also turned violent on Friday when protesters gathered to demonstrate against asylum-seekers.

The Minister-President of the south-western state of Baden-Württemberg, Winfried Kretschmann, said in an interview on Sunday with newspaper Frankfurter Allgemeine Zeitung that he wants more refugees to be sent to less-populous regions in eastern Germany.

Areas that take in more refugees could also receive some compensation, he suggested.