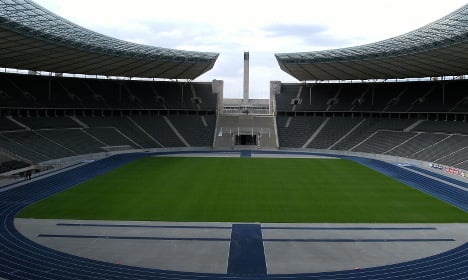 “These are the games of reconciliation,” Alon Meyer, president of Maccabi Germany, said of the 10-day event where a record 2,300 athletes from 36 countries will compete in 19 disciplines, from football to chess.

It is the first time Germany will host the Jewish Olympiad, which was launched in 1929 in Prague for European Jews, followed by the first world games held in 1932 Tel Aviv in what was then British-mandated Palestine.

To be held under tight security, the 14th European Maccabi Games have “strong historical and political significance,” said Chancellor Angela Merkel, who expressed Germany's “gratitude” for the rebirth of Jewish life in the country responsible for the Holocaust.

After a memorial service Monday in the former Sachsenhausen concentration camp near the capital, German President Joachim Gauck will Tuesday kick off the Games before 15,000 spectators at the Waldbuehne, an outdoor amphitheatre near the stadium where Adolf Hitler opened the 1936 Summer Olympics.

The main events will take place in the Berlin Olympic Park built for the Nazi-era Games, where the exclusion of Jewish athletes, which had been a worsening trend for decades amid a tide of anti Semitism sweeping Europe, reached its peak.

The ban on Jews in many sports clubs was at the root of the Maccabi movement founded in the late 19th century, said Oren Osterer, a former basketball player and head of the organisation of these Games, speaking on RBB public radio.

Inspired by the Zionist movement, Maccabi was born as a quest for the “muscular Jew”, said Alon Meyer. He also pointed to an egalitarian spirit that values juniors, seniors and veterans, not just top performers.

Off the field, the Games will also try to establish “a non-sports record,” by throwing a Shabbat party that aims to be even bigger than a record-setting get-together last year in Tel Aviv.

Fifty years after then-West Germany and Israel established diplomatic relations, the competition also marks the reassertion of the German Jewish community, whose identity remains troubled by the memory of the Holocaust.

Germany's Jewish community, which had been decimated to a few thousands after WWII, has grown again to some 240,000.

Before the 2011 European Games in Vienna, “nobody wanted to compete as a German” at the Maccabi Games. The German delegation previously would march under the colours of Israel, rather than Germany's black-red-gold national flag, recalled Meyer.

“Some have doubted it is fair to bring the Games to Berlin while there are still Holocaust survivors,” he said. “But we are a new generation … and the question of guilt has been resolved for a long time.”

The Maccabi magazine nevertheless devotes several pages to the testimony of Margot Friedlaender, a 93-year-old concentration camp survivor who in 2010 returned to settle in Berlin, and in another article asks: “Can Germany be a homeland for the Jews?”

Rebecca Gop — speaking for Berlin Jews born after the war who have “scrupulously learned Hebrew” and imagined that their children would one day go to Israel — describes her ambivalence about her son's attachment to Germany.

“Today, my inner wall has fallen,” she said in the Games' “Maccazine”.

“But I also know that for many of us it is hard to call this country ‘our home'.”'Nazi Game