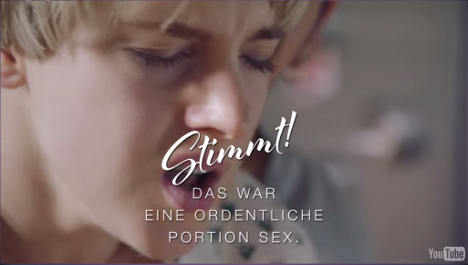 “Can you recognize the difference?” The video asks before giving you the option to play.

In one section a pretty blond woman blushes feverishly. After a few seconds of watching her chew on nothing except her bottom lip, you are given the options “Orgasm” or “Sushi”.

In a later section a man lies naked in bed pushing his tongue out of his mouth, wriggling around as he does so. Is he in the midst of a bit of self-love or just looking at a croissant he's about to pop in his mouth?

“It was love at first bite” reveals the video before panning out to show a bag of buttered croissants.

Apparently even pre-packaged pastries at Edeka are that good.

A spokesperson for the supermarket told The Local that their advertising “is rooted in humour and should be viewed with wink and a nudge”.

But the combination of sex and absurdity could just make it a success. The campaign was launched on Tuesday and the YouTube video already has over 100,000 hits.

Edeka has made a concerted effort over the past 18 months to appeal to a younger audience. Its advertising campaigns have enjoyed massive success largely because the company can laugh at what it is – a drab completely unindividualistic supermarket chain.

The most famous advert, which has clocked up 14 million hits on YouTube, made a star out of Berlin artist Friedrich Lichtenstein, after taking 'Supergeil', his music collaboration with Der Tourist, and making an advert out of it.

Continuing the theme of the slightly past-it rocker, Scooter frontman H.P. Baxxter starred in an Edeka ad from earlier in the year that mashed up some of the 90s dance group's most famous hits.

When a group of young men spot Baxxter in the supermarket and one cockily asks whether his voice is still what it once was, Baxter shouts out “How much is the fish?” – one of his most famous lyrics. A shelf-stacker pops up to reply “One euro 59 cents.”

Baxxter then jumps on a checkout belt shouting “Hyper, hyper” – another classic Scooter title – to advertise the shop's hyper-cheap prices.

Most successful of all was a video called Cashier Symphony, shot using hidden cameras in the build-up to Christmas 2014. It has to date been seen almost 26 million times on YouTube

As German shoppers queue up with their goods, the shop suddenly goes dark and the cashiers start to play jingle bells by swiping bar-codes and using the resultant bleeps to make music.

A beat boxer then joins in as the cashiers go through a repertoire of Christmas jingles – to the astonishment of the crowd.