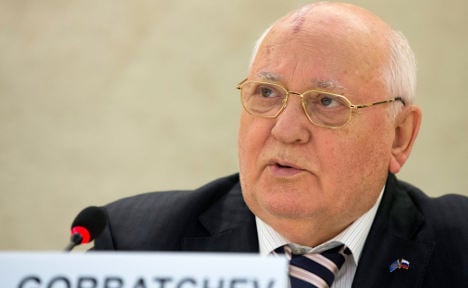 The ageing Russian leader said he is concerned by the country's deteriorating relationship with the West, nearly 30 years after US president Ronald Reagan's call for Gorbachev to “tear down this wall!” and end the divide between East and West.

“What concerns us most today is the relationship between Germany and Russia,” the 84-year-old Gorbachev told official Russian news agency TASS.

Gorbachev, who was a key player in the collapse of the Berlin Wall in 1989, said that after World War II, “everyone thought that Russia and Germany couldn't cooperate, but they succeeded”.

He said the two governments should “show wisdom and responsibility and restore confidence and dialogue”, adding that there “was no time to lose”.

The remarks came as diplomatic relations between Russia and the West are at their lowest ebb since the fall of the Soviet Union in 1991.

After Russia annexed Crimea in 2014 and the conflict in Ukraine broke out — with a death toll of more than 6,500 in just over a year — the EU and Washington imposed a set of economic sanctions against Moscow.

In response, Russia declared strict embargoes on European products such as Danish flowers and Polish cheese.

Since June, German Chancellor Angela Merkel has stood alongside US President Barack Obama, supporting the decision to impose the sanctions.