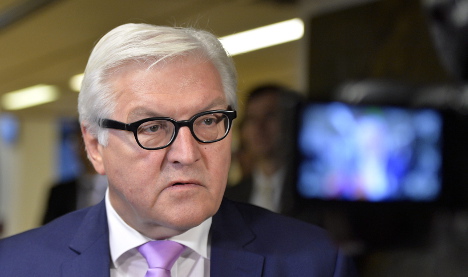 The spokesman, Martin Schaefer, told reporters that the revelations, “if true”, were “damaging” relations between Germany and the United States.

“He confronted him with the accusations and stressed that we expect the necessary clarifications and explanations on this case and all the other cases that remain unresolved,” Schaefer said.

“We are demanding this, we want this, we would like this, we are insisting on this.”

Schaefer said that during the nearly two-year-long scandal over NSA spying against Germany, information had only emerged “bit-by-bit and via media outlets”.

Meanwhile both Berlin and Washington “have all the reason in the world to have good and fruitful and constructive ties” given the diplomatic and security issues facing them as partners, he said.

“I cannot see what sensible balance — if the reports are true — you could have between the findings of such espionage and the major diplomatic damage caused by this.”

The daily Süddeutsche Zeitung and public broadcasters NDR and WDR reported this week that the NSA had tapped a mobile phone number used by Steinmeier as early as 2005, at the beginning of his first term as foreign minister.

German-US relations were badly strained after fugitive US intelligence contractor Edward Snowden in 2013 revealed widespread US foreign surveillance, although a probe into the alleged tapping of Chancellor Angela Merkel's mobile phone was dropped due to lack of proof.

Earlier this month Merkel's chief of staff called Emerson to the chancellery over reports the United States did not just listen in on Merkel's mobile phone, but also eavesdropped on several ministers.