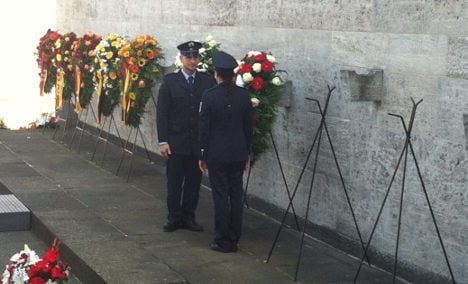 It is not often that Germany allows itself to look back on the Second World War with a sense of pride and reverence at the actions of its own citizens. But the annual memorial service at Plötzensee Prison is different.

The memorial is held to coincide with the anniversary of what is popularly known as Operation Valkyrie when a group of military officers under the leadership of Claus von Stauffenberg tried to kill Hitler by planting a bomb under his desk.

That plot failed – Hitler walked away with shredded trousers and a perforated eardrum – as would all other assassination attempts on the Führer. But for the July 20th Foundation, it still plays a vital role in modern German history.


“This day is of immense importance for Germany because the justification for our free constitution is unimaginable without the exemplary role of that action,” Rüdiger von Voss, a board member at the foundation, told The Local.

For Von Voss the day is also of great personal significance. His father Hans-Alexander von Voss was part of the assassination plot, but killed himself before the Gestapo could execute him.

But, Von Voss explained that it was not only his father and his co-conspirators who stood up against Hitler. Over 3,000 people, most of them Germans, were executed by the Gestapo at this prison for treason.

The memorial, he said, is not only about remembering the past, but also learning from it, too.

“This spot is a reminder not only to Germany, but to Europe, too, to beware of injustice and violence,” he said. For Müller the actions of the July 20th bombers serve as a reminder of the moral failings of the majority of Germans.

Addressing the crowd of 200, many of whom had family members executed at the prison, Müller said “Plötzensee teaches us that the resistance against Hitler had many faces.

“And when we reflect today on the victims who acted against [his] inhumanity, we ask ourselves how it was that the majority of Germans supported the Nazis.”

Speaking after the mayor, Reiner Hoffmann, executive of the German Association of Trade Unions, paid homage to the sacrifice made by trade unions in their resistance against the Nazi regime.

The guests then observed a minute's silence before wreaths were placed at the wall behind which members of the resistance were executed.

Defence Minister Ursula von der Leyen was among those who paid their respects at the service.

“Did the majority of Germans lose their sense of humanity? Were they too afraid to help? Were they convinced Nazis? Did they hope to profit from the regime? Or did they tell themselves that everything would turn out OK? All of these will have played a part,” concluded Müller.