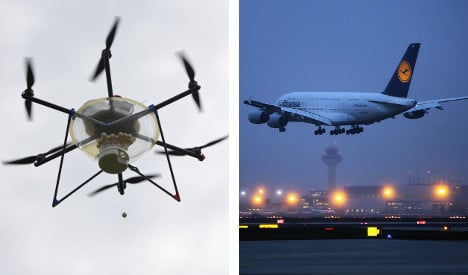 Pictures of a drone and a Lufthansa plane. Photos: DPA.

Police arrested a 39-year-old Polish man who they suspect to be the pilot of the drone flying recreationally around Warsaw airport. They will review the stored data of the man's drone to see if it corresponds with the events on Monday and was in fact the unmanned vehicle that disrupted air traffic.

The Lufthansa plane was flying into Warsaw from Munich on Monday when it came within 100 meters of hitting a drone flying in the airspace, an airport spokesperson told broadcaster N-24 on Tuesday.

The plane carrying about 100 people still landed safely, but air traffic controllers directed 20 other planes to land at a different entry lane, according to Spiegel Online.

Police and military authorities searched for the person controlling the drone by using helicopters.

Officials have often warned that drones can be very dangerous for planes and the unmanned vehicles are barred from buzzing around airport zones in Germany.

There are no regulations in Poland about the use of personal mini-drones.