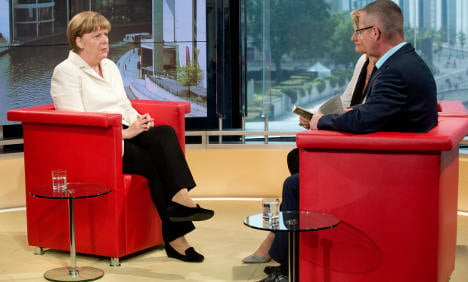 Angela Merkel being interviewed by ARD on Sunday. Photo: DPA

Merkel told public broadcaster ARD that she had been honest and sympathetic with 14-year-old Reem, whom she met last week at a public discussion under the banner “Living Well in Germany”.

During the exchange, which touched off a heated debate on immigration policy after a video of the event went viral, Reem told Merkel in fluent German that she and her family, who arrived in Rostock from a Lebanese refugee camp four years ago, faced possible deportation.

“It's really very hard to watch how other people can enjoy life and you yourself can't … I don't know what my future will bring,” she said.

Merkel responded that Germany would be unable to shoulder the burden of all the people fleeing war and poverty who would like to move to Europe's top economy seeking a better life.

Minutes later, Reem began to weep and the chancellor stroked her head and tried to comfort her in a way critics said appeared awkward and cold.

She said it would be wrong to tell people “just because you met the chancellor, we can resolve your case faster than many, many other people's”.

“We are a state under the rule of law,” she said. “But nevertheless, you want to comfort a crying girl.”

“It would have bothered me more if she had not been honest,” she said.

Officials later said it was unlikely Reem and her family would have to leave Germany given how well-integrated they appeared to be.

Germany's upper house of parliament recently passed a measure making it easier for certain refugees to stay on in Germany.

Members of Germany's ruling left-right coalition at the weekend said that the reforms should go further to prevent asylum seekers like Reem from being deported.

The debate comes amid rising tensions in Germany over a strong influx of asylum seekers, expected to reach 450,000 this year.

Xenophobic sentiment has swept some regions of the country and President Joachim Gauck this month denounced a series of arson attacks against buildings set to house refugees as “despicable”.