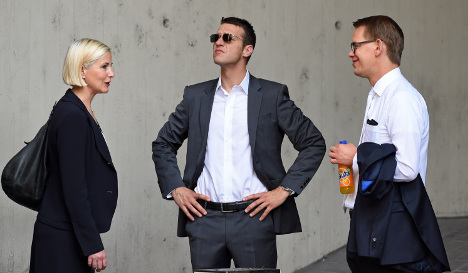 The lawyers had repeatedly clashed with the woman in the dock, 40-year-old Beate Zschäpe, the surviving member of the alleged killer trio called the National Socialist Underground (NSU).

However, chief justice Manfred Goetzl averted a possible mistrial by ordering Zschaepe's public defenders to stick with the case, arguing they had not given sufficient grounds for quitting.

The NSU is blamed for the assassination-style gun murders of 10 people — eight men with Turkish roots, a Greek migrant and a German policewoman — between 2000 and 2007.

Zschäpe is accused of aiding the killings and other crimes, including a nail-bomb attack in a Cologne migrant neighbourhood which wounded at least 23, and 15 bank robberies to finance the NSU.

The NSU's two male members, Uwe Mundlos and Uwe Boehnhardt, died in 2011 after a botched bank robbery, in an apparent murder-suicide while hiding in their getaway vehicle, a rented camper van.

Zschäpe has stayed silent since the start of her high-profile trial in May 2013, held under tight security in the southern city of Munich.

She had repeatedly clashed with her three court-appointed lawyers — Wolfgang Heer, Wolfgang Stahl and Anja Sturm — and tried to fire them a year ago, unsuccessfully.

On Monday, the three lawyers asked to stop representing her. The court adjourned its hearings to consider the request, before rejecting it.

They must now keeping working, together with a fourth lawyer, Mathias Grasel, appointed several weeks ago.

Germany was shocked in 2011 to find that the bloody murder spree — long blamed by police and media on migrant crime gangs — was in fact committed by a far-right group with xenophobic motives.