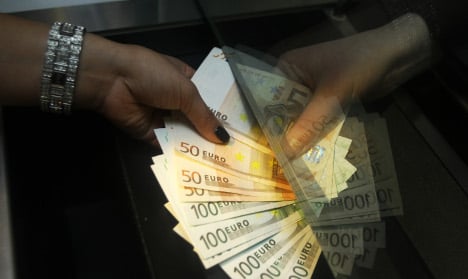 A strong labour market and comfortable incomes have helped German households’ financial assets to rise by €140 billion in the first quarter of the year, according to the report, climbing to €5.212 trillion – a record high.

“In the first quarter of 2015, the financial assets of households rose exceptionally steeply by just under €140 billion (i.e. 2.8 percent) on the quarter,” the report stated.

The values did not include art or property.

Germans still showed an “ongoing high level of risk aversion” and did not take advantage of low interest rates by taking out significant loans. Households’ total liability increased by just 0.2 percent to €1.588 trillion, with €4 billion in loans taken out during the first quarter.

Most of the loans were taken out with domestic banks to buy houses.

The combination of rising overall wealth and low liabilities resulted in a “substantial increase” in net financial assets of just under €137 billion (3.9 percent) to €3,624 billion during the quarter.

The debt ratio – or the total liabilities as a percentage of annualized nominal gross domestic product – shrank by 0.3 percentage points to 54.3 percent by the end of the reporting period.

But such wealth is not necessarily shared equally across the country. A study last year revealed that the distribution of wealth in Germany was the most unequal in the eurozone.

Another study this year showed that Germany has some of the biggest gaps between rich and poor among developed countries.