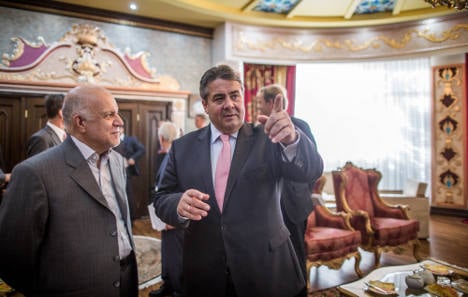 Gabriel, who is also Chancellor Angela Merkel's deputy and energy minister, embarked on the three-day trip with a “small delegation of representatives from companies, industry groups and the sciences”, his ministry said in a statement.

Gabriel is due to hold talks with Iranian President Hassan Rouhani, three ministers, the head of the central bank and the chamber of commerce following Tuesday's landmark nuclear agreement, German news agency DPA reported. After Tehran, he will travel to the southern city of Isfahan.

The long-delayed nuclear pact “lays the foundation for normalizing economic ties with Iran on the condition that the steps set out in it are now implemented”, Gabriel said in the statement.

The head of the German Chambers of Commerce and Industry, Eric Schweitzer, accompanying Gabriel, called the trip “an encouraging sign” for companies that lost ground to Chinese and South Korean firms in the resources-rich Gulf state due to Western sanctions.

Iran and the P5+1 group — Russia, the United States, China, Britain, France and Germany — struck the agreement with Iran after a 13-year stand-off over its disputed nuclear programme.

The international agreement finalized in Vienna aims to ensure the Islamic Republic does not obtain nuclear weapons.

In exchange, the country of 78 million people will be given step-by-step relief from crippling international sanctions.

Schweitzer called for German companies to be given legal protection for upcoming investments made in Iran in case Tehran violated the terms of the nuclear deal and a trade embargo were imposed again.

“Such a framework would give companies the necessary legal security to return to Iran,” he told DPA.

Gabriel later told Bild newspaper in an article to be published on Monday that long-term ties with Tehran would depend on Iran recognizing Israel.

“Israel's right to exist must no longer be questioned. Truly strong, stable relations will only develop when this is acknowledged by Iranian policymakers,” he said. “I will repeatedly make this clear during my visit.”

Iran and Germany were historically close trade partners but business dropped off as a result of the sanctions, declining to €2.4 billion last year from around €8 billion in 2003-2004, according to German figures.

Schweitzer said bilateral trade could quadruple in the next two to three years to around €10 billion.

Iran has the world's fourth largest oil reserves and the second in gas, meaning it has the biggest combined energy deposits.

However critics called on Gabriel not to lose sight of human rights in the race to rebuild trade ties.

The uncle of 26-year-old Iranian Reyhaneh Jabbari, who was hanged last year for killing a former intelligence officer to ward off what she said was an attempted rape, told Bild that Gabriel was “doing business with an inhumane regime”.

“When he signs contracts, he should think about the people sitting in prisons, about the regime critics, the tortured, the condemned,” Fariborz Jabbari, a member of Berlin's large Iranian exile community, said.

The head of the German chapter of Reporters Without Borders, Christian Mihr, told Bild it would be “disastrous” if on Gabriel's visit “economic interests were put ahead of human rights and press freedom”.

He urged Gabriel to call for the release of incarcerated journalists and bloggers.