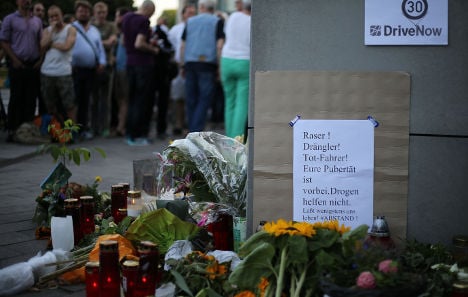 Flowers laid on Thursday where a cyclist died after being struck during an illegal street race. Photo: DPA

On Thursday evening, a silent vigil was held in Cologne, at the spot where a speeding car had struck a cyclist earlier in the week.

Flowers, candles and photographs now adorn the area, forming a small memorial on the roadside.

For former Cologne Mayor Fritz Schramma, this week's incident had a particular resonance.

He and his wife described the “anger, disappointment and frustration” they experienced upon learning that illegal motor racing had claimed yet another life.

In 2001, their own son was killed in a similar way – whilst walking down a street in the city.

“He was just about to get married,” said Schramma.

The death brings the total number of innocent bystanders killed through illegal racing in Cologne this year to three – an unprecedented figure for Germany.

The Rhineland city is becoming notorious for its illegal racing scene – and for the destruction these races wreak upon the historic city.

For prize money or against the clock

Yet illegal motor racing is an issue “across Germany,” stressed the Rhineland Technical Control Board (TÜV).

Sometimes large sums of prize money are paid out for the races, said Karl-Friedrich Voss, Chairman of the Federal Association of Certified Traffic Psychologists.

“Another variation sees drivers racing against the clock.”

Those involved are usually young men aged between 18 and 25 – “those whose self-confidence depends on from cars and racing,” said Voss.

“Often it's those who see no future career prospects for themselves, and don't have strong family connections.

“The car you drive has become an accepted means of portraying yourself, especially in Germany,” he continued.

“And in some people, this sense becomes exaggerated, meaning they feel their identity is threatened when others are faster than them.”

To change the behaviour of these young men, problems they are facing in their careers or private lives must first be solved, Voss explained.

'Fast and Furious' – a fatal example

Most of the time, races take place on remote industrial estates or on streets during the night.

However, in recent times the focus has shifted – with many races aiming to attract large amounts of public interest.

Roman Suthold, from the General German Automobile Association (ADAC) is convinced that Hollywood films like 'Fast and Furious' serve as a fatal example to young Germans.

“They take part in all of these virtual races, and then think that because they've mastered it on the computer screen, they can do it in real life,” Voss said.

“And these computer games replicate urban races, through city streets – which is exactly what we are seeing now in Cologne.”

Schramma described the practice as “almost like a game of Russian Roulette.”

Those responsible for the death of his son were given a suspended sentence.

“Perhaps they have since had families of their own,” pondered Schramma, “and think about their actions once in a while.”

He and his wife have set up an association for accident insurance and victim protection.

“Through this, we can process a small amount of our grief,” explained Schramma.

“But as parents, the pain stays with you your whole life.”