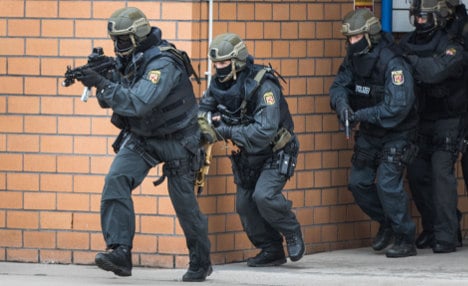 The sound – made by flash grenades – was followed by a command over a loudspeaker: “Mr K., come out with your hands raised.”

According to a report by the Lippische Landes-Zeitung, a special police unit (SEK) then proceeded to storm a flat in the residential area of Horn-Bad Meinberg.

Tearing down the door with a battering ram and breaking several windows, officers reportedly threw the tenant to the ground and bound him with cable ties.

But shortly afterwards, a detective arrived at the scene and determined that this wasn't the Tim K. the SEK were searching for.

The police unit had got the wrong address.

At this awkward discovery, officers allegedly removed the ties, and left without comment or apology.

53-year-old Tim K., whose flat was stormed – and is a former SEK officer himself –  told LZ that he immediately threw himself onto the floor upon hearing the grenades and loudspeaker command, shouting: “I'm here.”

The SEK stormed K.'s home on the suspicion he was hoarding illegal weapons, and due to alleged links with biker gang 'Brothers MC,' said a Bielefeld police spokesperson.

The suspicions apparently came from a reliable witness source.

However, K. thinks the early-morning raid had something to do with the two books he has published about his time in the SEK.

“I've obviously put my foot in it,” he told LZ. “That's the only way I can explain this aggressive police operation.”

“Obviously, the officers didn't find any weapons on me, but they were deeply interested in my book notes. And they took photos of everything.”