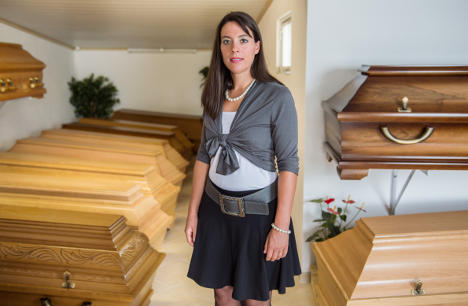 “It is wonderful to show this depressing taboo theme in another light for once,” said winner Rahel Merks.

Merks, who has large eyes and a smile that beams from one side of her face to the other, beat of competition from 46 other competitors to be crowned “Miss Farewell” – the most beautiful undertaker in Germany.

The 36-year-old runs her undertaking firm with her husband in Lachheim, Baden-Württemberg and clearly has a passion for her work.

“I am a last event manager ” she jokes. “I am counsel and companion. I have an intimate relationship to people.”

After Merks' brother-in-law brought the competition to her attention she sent a few photos to the jury and a short description of herself.

The judges noted that it was not only her physical beauty that made Merks stand out, but her lust for life too.

“Beauty is always about maturity and character,” Merks herself said. “I wouldn't have anything to do with Miss Baden Württemberg.”

But other reactions from within the industry were somewhat more grave.

“In this sensitive line of work, that's really pushing it,” said Hans-Joachim Möller, manager of the association of independent undertakers.

Rolf Lichtner of the Association of German Undertakers was more sympathetic, saying the competition was “a nice joke” and that “it doesn't hurt when an undertaker is also beautiful.”

Lichtner also points out that the profession is by no means struggling for life.

“It is an attractive profession because its offers variety and a human touch,” he says, pointing out that there are more people trying to get into the business than there is demand for.

But Merks' husband Stefan is delighted.

“I often tell my wife how beautiful she is,” he says, grinning. “Now finally she believes me.”