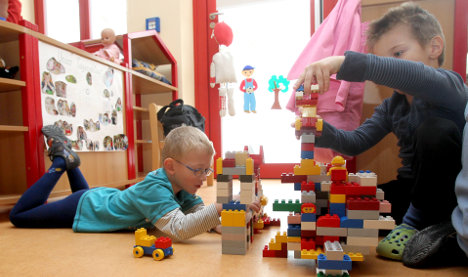 The demands follow recent analysis carried out by the organisation – which produced worrying results.

BUND tested a range of plastic, fabric and leather products from a well-known manufacturer. The products included toys such as action figures, as well as a dressing up costume and children's bath toys.

The products, mostly produced in China and India, are widely available across Germany.

In the analysis, only one in nine products was found to be free from plasticizers and other harmful chemicals.

In five of the nine products, BUND found plasticizers – so-called phthalates – which can be taken in via the mouth or direct contact with the skin.

In one product, experts found traces of DEHP – a phthalate banned in toys across the EU. In the product, levels of DEHP were above the EU limit of 0.1%.

“Because supply chains are so long, manufacturers often don't know what's in their products,” said Kallee.

Levels of DEHP were “extremely elevated” in one snorkel set also tested by the group.

“This is actually not illegal, as the product is being marketed as a commodity rather than a toy,” said Kallee. “But we consider it worrying that such a product could end up in a child's mouth.”

Six of the products tested were found to contain polyaromatic hydrocarbons (PAK), which according to BUND can be carcinogenic – prompting concerns that current regulations aren't strict enough.

'A “cocktail” of chemicals

Although in many cases the levels of chemicals found were below EU limits, BUND fears that a harmful “cocktail” of chemicals could be present in many everyday products.

The Federal Institute for Risk Assessment (BfR) has stated that it cannot make a full health assessment based on BUND's report.

It is inevitable that small amounts of these substances will be released upon contact with saliva or sweat, they said.

“Only those substances which have been released in such a way can actually be taken in by the body and have any possible effect on health,” they continued.

The German Toy Manufacturers' association (DVSI) has criticised BUND's report, which is based on the organization's own criteria rather than legal requirements.

Manufacturers are heavily involved in product development, they stated – and carry out “extensive tests” to insure the quality and safety of their products.

However, the global market has created new challenges in terms of detecting unsafe products and withdrawing them from circulation, they added.

Germany recently lost an appeal against the European Court of Justice (ECJ) regarding antimony, arsenic and mercury in toys, reported Chemical Watch.

The country wished to set its own limits for the heavy metals – which it argued were stricter than those set out by the EU toy safety directive.

However, the argument was rejected first by the European Commission, and on later dates by the General Court and ECJ.

Germany has been ordered to stick within EU limits of these heavy metals – with warnings of legal action if it does not fully implement the EU toy safety directive.

The metals, as well as being considered carcinogenic, can cause extensive damage to the nervous system.