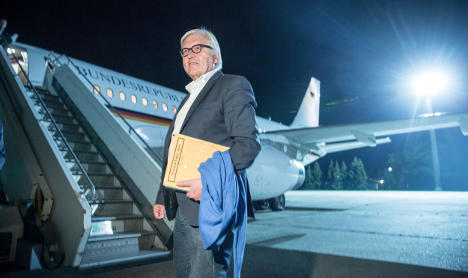 Steinmeier before his departure for Havana. Photo: DPA

In a further sign of the radical shift in relations between Cuba and the democratic states of the West, Steinmeier will make the first visit of a German foreign minister to Cuba when his plane arrives in Havana on Thursday morning.

On the agenda for Steinemeier during his two-day visit are talks with opposite number Bruno Rodriguerz as well as discussions with other members of the cabinet and meetings with artists and sportspeople.

The last time a representative of the German government visited Cuba was 14 years ago.

There are currently no plans for a meeting with President Raul Castro or his brother Fidel.

Steinmeier is to set out the case for seeing Cuba's relations with the European Union strengthened.

Since 2014 new negotiations have been underway between Havana and Brussels over a political dialogue.

Amnesty International has called on Steinmeier to bring pressure to bear on Cuba over its patchy human rights record during the visit.

Amnesty International Germany's head Selmin Caliskan said that in Cuba “it is still practically impossible to openly criticize the government.”

Steinmeier must impress upon the Cuban government the importance of every Cuban being able to enjoy their basic rights, said Caliskan

Cubna has step-by-step opened itself up to the outside world in the previous few years.

On Monday the USA and Cuba are to make the warming of relations between the two states official by re-opening their embassies in one another's capitals.