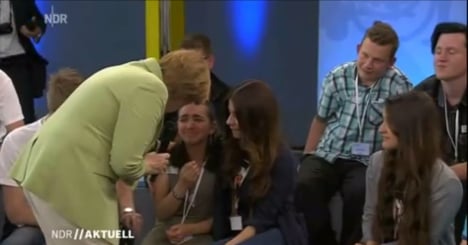 Merkel attempts to comfort a crying Reem during their encounter. Photo: Norddeutsche Rundfunk/Screenshot

“She listened to me and then gave her opinion. I'm fine with that,” said Reem Sahwil on ARD's Morgenmagazin on Friday.

Sahwil told Merkel in perfect German that her family was at risk of being deported, during a question and answer session the Chancellor was conducting at a school in Rostock.

The Chancellor replied that Germany could not take in every Palestinian refugee – a reaction which was condemned as cold-hearted on social media platforms.

“It's really difficult to see that others are really able to enjoy their lives and you yourself can't enjoy it with them,” Reem told the Chancellor as she explained that her hopes of studying in Germany would be crushed if she were forced to leave.

The young Palestinian girl added that she's been studying at the Paul-Friedrich-Scheel school in Rostock for four years and learned fluent German and English – not to mention a little Swedish.

But Shawil's chances of remaining in Germany are actually secure, due to a law brought in by Merkel's government in June.

The law states that minors who have been in Germany for a period of four years have a right to stay, as Aydan Özoğuz, the government's spokesperson of refugee issues, made clear to Spiegel on Friday.

Why Merkel did not mention this change in the law during the television discussion is unclear.

Merkel was almost lost for words on Wednesday when Sahwil confronted her about the fact that she and her family were close to being deported from Germany.

“I have goals like everyone else. [Studying] is really a wish and a goal that I would like to reach,” Sahwil said.

“I understand, and yet I have to… politics is sometimes hard,” Merkel, visibly caught off-balance in a session that was supposed to focus on “living well in Germany”, blustered in response. “Of course you are an extremely nice person…”

But the Chancellor soon collected herself for the watching television cameras, launching into a defence of German refugee policy to please the crowd at home.

As Reem began to cry shortly afterwards, Merkel stepped forward to stroke her hair, saying, “but you did a great job”.

“I don't think it's about doing a good job, but the fact that it's a very difficult situation, Madam Chancellor,” the presenter interjected.

“I know that it's a difficult situation,” Merkel shot back. “That's why I want to comfort her, because we don't want to bring all of you into such situations and because you are having a difficult time, because you've shown for a lot of other people what situations you can end up in…”

Merkel has come in for widespread criticism and mockery online for her handling of the unexpected encounter under the Twitter hashtag #merkelstreichelt (Merkel strokes).

“If you have the problem that you think Angela Merkel is too nice, watch this video and look out for the final phrases,” left-wing commentator Sascha Lobo wrote.

“Christian, scientist, politician. But failed rhetorically and as a human on all fronts,” another user judged.

“Explaining to a young girl on live camera that her fate doesn't matter to you – just shameful,” wrote Jan Schnorrenberg, manager of the opposition Green party's youth wing.

Merkel's PR team appeared to make the problem worse on Thursday when they described the encounter for the “Living Well in Germany” website.

Government flacks wrote that Reem had burst into tears “out of great agitation” after Merkel explained the government's plan to introduce an accelerated asylum procedure to her.

Twitter users were particularly angry that the release ended with the words “everyone applauded one another after 90 minutes of lively discussion”.

“Merkel could have shaken off the video. But the PR report from her hacks about it? Probably not,” wrote blogger René Walter.

It looks like he's right, as Merkel's failure to comfort Reem accounted for the top three Twitter trends in Germany on Thursday morning.