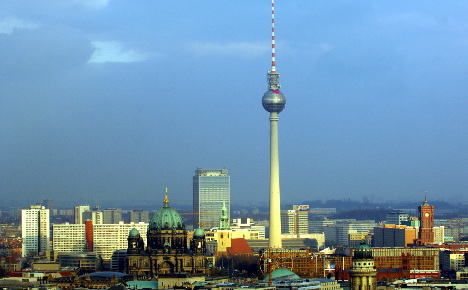 Watch out London... Berlin is on the up. Photo: DPA

A study by research database VentureSource commissioned by Die Welt estimated that $2.2 billion (€2.01 billion) was invested in Berlin firms last year, compared to $1.5 billion (€1.37 billion) in London – and the investment boom looks set to continue for the German capital.

In April, realbusiness.co.uk reported that London was beginning to face competition from Berlin, with global real estate portal Lamudi predicting that the German capital could overtake London within five years.

Data published by Lamudi illuminates one of Berlin's attractions: its living expenses. While a one-room apartment in zone one costs around €2000-2500 per month in London, a similar apartment in Berlin sets tenants back around €600-800 a month.

Transport in London is also more than double the price of that in Berlin – with monthly transport costs between zones one and two around €170 in London compared to just €80 in Berlin.

“While London offers a good foundation in terms of capital and tech support for start-ups to grow, it mainly lacks quality of life,” commented Paul Hermann, Co-Founder at Lamudi.

“Berlin, on the hand, offers both.”

'A vibrant and creative city'

When thinking of where to produce their app, which helps users to learn piano without reading music, founders Jonas Gößling, Alexander Heesing and Ahmed Hassan were drawn to Berlin as a “vibrant and creative city.”

While it has historically been a place of low rents, something which “attracts many young professionals” and remains cheaper than London or Paris, “that has been changing dramatically,” Herrmann said.

“In London or Paris that’s probably much harder to find,” she added.

Hermann views the start-up scene as a vital part of Berlin's economy – and one that is continuing to boom.

“When you’re in Berlin, you can literally feel the start-up scene grow each month,” she explained.

“Start-ups have become the 'It Girls' of the economy.”

The German capital is “an attractive place to be,” he told The Local, noting the abundance of new talent entering Berlin, and the relatively low cost of living in the city.

While prices have risen in recent years, young businesses are still able to get “more for their money” than in many other European cities.

“This helps new businesses get off the ground,” he added.

Deerman also sees Berlin's start-up scene as a work in progress. “It's growing now,” he explained, “and getting a lot more attention from outside investors.”

SEE ALSO: How to get hired at a Berlin start-up