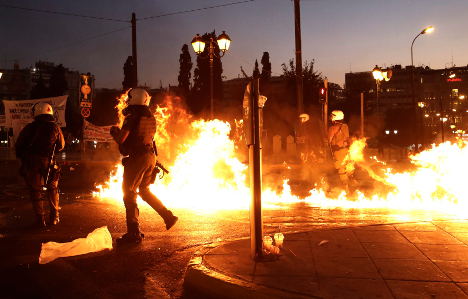 “We are one step further,” Schäuble told Deutschlandrundfunk. “That was an important step.”

But the finance minister also indicated that had backed a temporary Grexit until it was clear it was no longer an option.

Many economists have their doubts that Greece can solve its problems without a cancellation of debt,  he explained, adding that such an agreement is not compatible with eurozone rules and that therefore the only option would be for Greece to temporarily leave the euro.

“Perhaps that would have been the better option for Greece,“ he said.

Late on Wednesday 229 of Greece's 300 parliamentarians voted for the implementation of the reform package agreed early on Monday in Brussels despite dozens pf rebellions within Prime Minister Alexis Tsipras' own Syriza Party.

During debates in the Greek parliament on the reform package demonstrations in the street broke out into violence as demonstrators threw Molotov cocktails at police in some of the worst violence Athens has seen in two years.

The reform package will now have to be approved in other eurozone parliaments before it becomes the basis for negotiations on an €86-billion third bailout package for Athens.