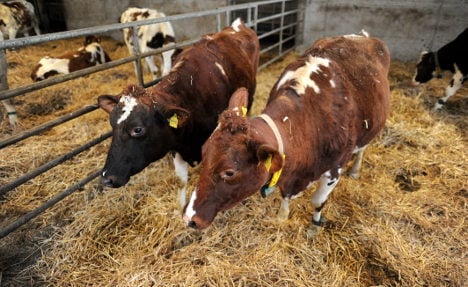 The unborn calves are often only discovered when the mothers' carcasses are gutted, reports Die Welt.

The Federal Minister for Agriculture Christian Schmidt of the Christian Social Union (CSU) told ARD's Report Mainz on Tuesday afternoon that this state of affairs is “absolutely unacceptable.”

“We want to do something [about this] and we must do it,” Schmidt told

The government plans to bring in new regulations and to strengthen oversight at slaughter houses, making it illegal for cows in the last third of their pregnancy to be transported, Schmidt announced.

But Christian Meyer, Minister for Agriculture in Lower Saxony, has criticised Schmidt for acting far too slowly.

“When Minister Schmidt suddenly announces that he wants to act, he's twisting reality,” Meyer of the Green Party told NDR. “He should and could have done something a long time ago.”

Meyer noted that in September 2014 at a meeting of the state agriculture ministers in Potsdam eleven of the states called for a ban on the practise.

“But Herr Schmidt didn't budge for a year,” he said.

The German Farmers' Association said in a statement that “from the point of view of the livestock owner this type of slaughter makes no sense either from a moral or from an economic perspective.”

“Exceptions could be made on the basis of medical indications or due to reasons of necessary disease prevention measures.”

Currently there is no law regulating the slaughter of pregnant animals either at the national or the European level.

The German Farmers' Association claim to have made efforts in recent months to raise awareness among farmers that they should not send heavily pregnant cows to the slaughter house.

At the time of publication the Ministry of Agriculture could not be reached by The Local for comment on whether legislation on the issue has yet been drafted.

Schmidt has made ending needless suffering among animals a key part of his programme at the Ministry of Agriculture, promising also to bring in rules to end the shredding of male chicks by chicken farmers.