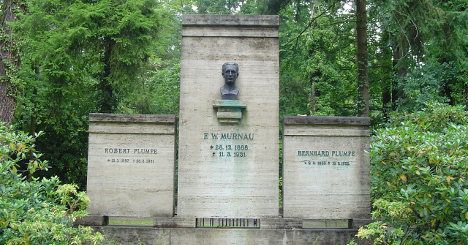 Police believe that the theft happened on the weekend, Der Tagesspiegel reported on Tuesday night.

Stahnsdorf cemetery warden Olaf Ihlefeldt, who discovered the theft during his rounds of the cemetery near Berlin on Monday morning, said that the crime was “a scandal” that had robbed the dead director of his dignity.

Ihlefeldt was stunned to find the head missing as he slid the lid of the coffin away while investigating minor damage he had spotted on mausoleum number 22.

Murnau's body was embalmed and placed in a metal coffin following his death in a traffic accident in the USA in 1931.

The following year, his remains were shipped to Germany for burial in Stahnsdorf's south-west cemetery (Südwestkirchhof).

Ihlefeldt said that while the body didn't look particularly good, it was still in good condition. The warden had been regularly checking the condition of the corpse – and that it was still there – since a previous episode of damage to the grave in the 1970s.

Murnau's head, in particular, was still recognizable and had its hair and teeth – although it appears to have been easily removed from the skeleton, Ihlefeldt said.

Police told the Potsdamer Neueste Nachrichten that there was no trace of the thieves or indication of their motives.

“I have no idea what kind of people [the thieves] were,” Ihlefeld told the Tagesspiegel.

Police have called for witnesses to report anything suspicious they may have seen around the cemetery recently.

Murnau's mausoleum has long been a place of pilgrimage for fans of the world-famous silent movie director and his work.

He became famous during the 1920s above all for 1922's “Nosferatu – a Symphony of Horror”, one of the most renowned films to be produced in Germany during the inter-war period. A loose adaption of Bram Stoker's 1897 novel Dracula starring Max Schreck, it stands out as one of the founding movies of the horror genre, with its camerawork and style influencing generations of fans and directors.