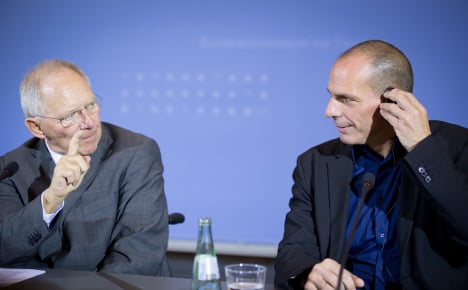 Schäuble's aim was to “discipline member states who opposed his very special plan to reform the eurozone,” Varoufakis alleges, saying that the German had “made [the social crisis] worse in a controlled way,” to bring Greece to the crunch point.

One of the German treasury chief's aims was to install a “high budget overseer” for the eurozone with a veto right over member states' budgets, he claims.

That would infringe “basic principles of western liberal democracy,” the economist-turned politician writes. “The consistency with which Dr. Schäuble advocates for a political union that contradicts the basic principles of a democratic federation is striking.”

Varoufakis further claims that when he first entered a meeting of eurozone finance ministers he was told that “elections change nothing” by Schäuble and a group of ministers from other hardline countries.

The German Finance Ministry on Wednesday maintained its insistence that the face value of Greek debt could not be reduced, in the face of a growing chorus of warnings from experts and international observers.

There could be no “significant” cut in the cash value of Greek debt, Finance Minister Wolfgang Schäuble's spokesman Martin Jäger told journalists at a Berlin press conference on Wednesday afternoon.

Germany's position flies in the face of advice from the International Monetary Fund (IMF), which said in a report (pdf) on Tuesday that the bailout deal offered to Greece by eurozone leaders on Monday morning would leave the country with “highly unsustainable” debt.

The IMF, which itself has lent large amounts of money to Greece, said that debt relief would have to take place on a scale “well beyond what has been imagined to date,” as well as recommending that creditors extend the maturity (repayment date) on Greek debt over the next 30 years.

Jäger said that Germany would consider allowing Greece to extend its repayment times but ruled out a so-called “haircut” (reduction in value of the debt).

Greece's government “must implement the agreed measures to restore trust,” he said.

The European Commission in Brussels said that it would invoke the European Financial Stability Mechanism to find €7 billion of cash to support Greece while it negotiates the remaining details of a new bailout package.

EU Commissioner Valdis Dombrovskis said on Wednesdasy that the EFSM was the “best possible way” to help Greece in the short term.

But there was anger in European capitals outside the single currency zone, as the EFSM allows the EU to borrow money against the guarantee of all members – not just the eurozone countries.

The EU had agreed that the EFSM would be superseded by the ESM – guaranteed only by the eurozone – in 2012.

Swedish Finance Minister Magdalena Andersson said on Wednesday that “certainly you should use the EFSM, but non-eurozone countries should stand without risk.”

“There is already an agreement not to use that mechanism anymore now that ESM is in place, and I presume that that agreement will hold,” Andersson had said earlier.

UK Chancellor George Osborne told eurozone leaders that profits made by the European Central Bank (ECB) made from lending money to Greece must be set aside as insurance to repay non-eurozone countries if Greece defaults, The Guardian reported.

Meanwhile in Athens there were emotional scenes in parliament as Prime Minister Alexis Tsipras began the first day of debating and votes to get laws demanded by the creditors through.

Of the far-left Syriza party's central committee, 108 members rejected the new deal with the other eurozone countries – although since not all of them are MPs, Tsipras may still retain enough support with his party and other parties' combined strength to get the measures passed.

Public sector workers called a nationwide strike and launched new marches through the streets of Athens on Wednesday. Varoufakis told parliament that the negotiations had failed and the new financial aid programme would fail.

And Greece's deputy finance minister handed in her resignation, saying that “the solution imposed today in such a depressing way is not sustainable for the Greek people and for the country.“

In Germany, there may be a vote in the Bundestag (parliament) as soon as Friday to give the government a mandate to negotiate a new financial aid programme with Greece.

But tabloid Bild reported on Wednesday that up to 50 MPs from Chancellor Angela Merkel's own party may reject the proposal.