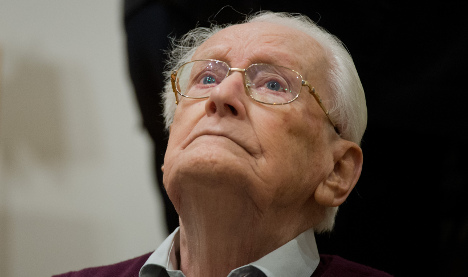 Oskar Gröning, 94, sat impassively in the packed courtroom as judge Franz Kompisch said “the defendant is found guilty of accessory to murder in 300,000 legally connected cases” of Jews sent to the gas chambers from May to July 1944.

He said Gröning had willingly taken a “safe desk job” in “a machinery designed entirely for the killing of humans”, a system that by any standard was “inhumane and all but unbearable for the human psyche”.

Gröning served as an accountant at Auschwitz in Nazi-occupied Poland, sorting and counting the money taken from those killed or used as slave labour, and shipping it back to his Nazi superiors in Berlin.

He also on several occasions performed “ramp duty”, processing deportees as they arrived by rail in cattle cars at the extermination camp.

The sentence was longer than the three and a half years prosecutors had demanded in the high-profile case which opened in April in the northern city of Lüneburg.

Gröning had on Tuesday seized a last opportunity to address the judges and said he was “very sorry” for his time stationed at the concentration camp.

“No one should have taken part in Auschwitz,” he said, his voice wavering.

“I know that. I sincerely regret not having lived up to this realisation earlier and more consistently.”

Defence attorney Hans Holtermann said he would review the verdict before deciding whether to appeal.

But court observers said it was unlikely Gröning would ever serve time in prison given his advanced age and deteriorating health.

A medical team will evaluate whether Gröning is physically capable of withstanding incarceration, and any sentence would only begin after any appeals are heard, prosecution spokeswoman Kathrin Soefker said.

“He can go home today as he normally would,” she said.

Holocaust survivors and victims' relatives who were co-plaintiffs welcomed the verdict as a “very late step toward justice”.

“SS members such as Gröning who took part in the murder of our families have created lifelong and unbearable suffering for us,” they said in a statement.

“Neither the criminal proceedings nor the words of the accused can alleviate this suffering. But it gives us satisfaction that now the perpetrators cannot evade prosecution as long as they live.”

Gröning acknowledged “moral guilt” during the trial but said it was up to the court to rule on his legal culpability seven decades after the Holocaust.

He had testified twice that he was so horrified by the crimes he witnessed at the camp after his arrival in 1942 that he appealed three times for a transfer to the front, which was not granted until autumn 1944.

The court heard harrowing testimony from more than a dozen Holocaust survivors, some coming from North America to have their day in court.

Because Kompisch made the surprise decision only Tuesday to deliver the verdict on Wednesday, many of the elderly witnesses were unable to fly to Germany in time.

However Leon Schwarzbaum, 94, who was held prisoner at Auschwitz for two years, raced from his home in Berlin to attend.

“I do not want revenge but I find it to be a fair verdict,” he said outside the courtroom.

Asked whether he could forgive Gröning, Schwarzbaum said: “No, because 30 members of my family were murdered.”

While some co-plaintiffs expressed disappointment that Gröning failed to apologise to them, others spoke of a kind of catharsis from the trial.

“We were able to bear witness about the monstrous and unspeakable crime committed against us and our families,” the survivors said in their statement.

Gröning had previously been cleared after lengthy criminal probes dating back to the 1970s.

But the legal foundation for bringing ex-Nazis to justice changed in 2011 with the German trial of former death camp guard John Demjanjuk.

While previously courts had punished defendants for individual atrocities, Demjanjuk was convicted solely on the basis of having worked at the Sobibor camp in occupied Poland.

Kompisch called it “scandalous” that it had taken so long for the German justice system to find the tools to handle such cases.

The head of the federal office investigating Nazi-era crimes, Kurt Schrimm, told the Bild newspaper this month that other probes of former concentration camp guards were still ongoing, although “many had to be terminated because the accused had died or were no longer capable of standing trial”.