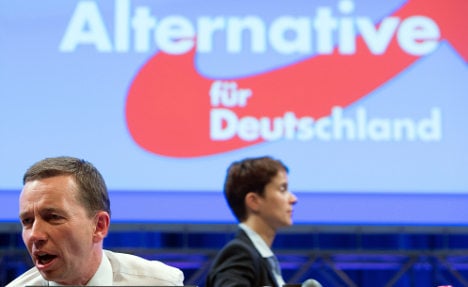 The ex-leaders of the economically liberal wing of the AfD sent a letter making the announcement to members of 'Wake-Up call 2015,' a group set up by Lucke in May in attempt to stop the party drifting into right-wing populism.

The organizers of the group intend to announce their decision officially next weekend, SWR reports.

The roll that Lucke has played in this decision remains unclear as he was not among the signatories of the letter.

The letter argued that the group had hoped to bring about change within in the AfD, but after the party conference in Essen a week previously they had come to the realization that they no longer controlled a majority within the party.

“The fundamentalist and conservative wing” will never give up their power… “We have lost the AfD,” SWR reports the latter as saying.

According to poll in Bild am Sonntag the upheaval within the party has had a serious impact on its popularity.

The poll put the party at 3 percent of the electorate, 2 percent below the necessary amount to gain representation in the Bundestag (German parliament.)

After the party conference in Essen roughly 2,000 of its members handed in their membership, including five of seven members of the European parliament.

Frauke Perty, whom the party conference confirmed as de fact party leader, said that the exodus would allow the AfD to put its disputes behind it and move on, reports the Süddeutsche Zeitung (SZ).

She claimed that she had been expecting around double the number of resignations as actually occurred.

Most of the resignations took place among politicians and members in West Germany, reports SZ.

the AfD was set up by Lucke, Petry and a group of right-wing economists as a protest against the European single currency in 2013.

But as it entered into domestic politics it came to represent right-wing discontent with government policies on issues such immigration and refugees.

In recent days Petry has tried to fight off accusations that the AfD is turning into the political wing of anti-Islamic protest movement Pegida.