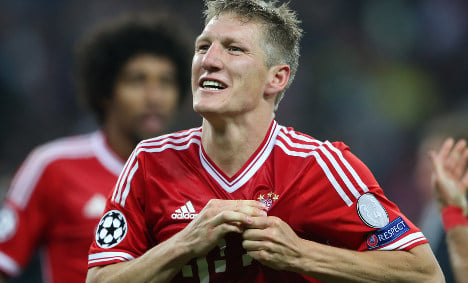 Rummenigge said Bayern and United have already agreed on an undisclosed transfer fee for the 30-year-old defensive midfielder, who has made 536 appearances for Bayern since his debut in 2002.

Schweinsteiger informed the German champions on Friday he wanted a change of scenery after 17 years and is expected to sign a three-year contract with the Red Devils.

“Bastian and I had a serious conversation on Friday and he told me he has been thinking about his career and wants to try something new,” said Rummenigge.

“He asked me to find a way and things between Manchester United and Bayern Munich have been clarified, we have agreed on a fair transfer fee.

“We have taken into account that Bastian is a very deserving player.

“We tried to convince him to stay with Bayern Munich, but I completely understand that after 17 years with us, he wants to experience something new.

“Other figures in German football like Franz Beckenbauer to New York, Gunter Netzer to Real Madrid and myself to Inter Milan, have taken the step in their careers to move abroad and I can understand his desire to do the same.”

United confirmed the arrival of what is the first ever German player to join the club in a statement on their official website.

“Manchester United is delighted to announce it has reached agreement with Bayern Munich to sign midfielder Bastian Schweinsteiger, subject to a medical and personal terms,” the statement announced.

Rummenigge said Schweinsteiger had turned down the chance to take part in Saturday's Bayern team presentation at the Allianz Arena and bid farewell to the Munich fans.

According to German daily Bild, Manchester United are set to pay between 18 and 20 million euros ($20-22.31m) for the Germany captain, but the transfer deal is not yet completed as Schweinsteiger has yet to have a medical check.

Rummenigge insisted there is no truth to reports Schweinsteiger is leaving Bayern because of problems with coach Pep Guardiola: “I would like to refer to that in the realm of fairytales,” he said drily.

Schweinsteiger comes to Old Trafford with a vast wealth of experience having helped Germany win the 2014 World Cup and has lifted the German league title eight times with Bayern and the German Cup on seven occasions.

He was part of the Bayern team which won the 2013 treble of Champions League, Bundesliga and German Cup titles under Jupp Heynckes and went on to win the Club World Cup and UEFA Super Cup at the end of the year.

Schweinsteiger has won 111 caps for Germany, playing in three World Cup finals, and he succeeded Philipp Lahm as captain of the world champions after their Brazil 2014 triumph.