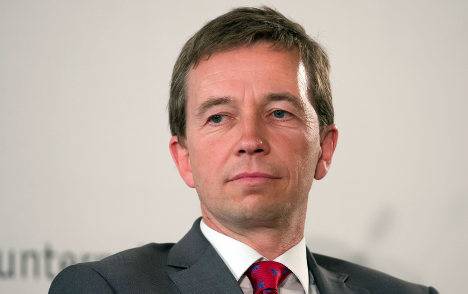 Lucke warned that the party has “fallen irretrievably into the wrong hands” as he announced his decision to the press.

He said that carrying on within the party would have meant acting as a “bourgeois cloak” for political views which he vociferously rejects.

He said that a knee-jerk anti-Americanism, xenophobia and a fundamental mistrust in the political system had taken over the party and signaled his regret that he had not been quicker to act against it.

Lucke said that he had not yet made up his mind on whether to set up a new party.

Frauke Petry who was given the largest share of members' votes at the conference in Essen, establishing her position at the head of the party leadership, said she believed Lucke's departure would be good for the future of the AfD.

“If disputes can be put aside because of this departure then it is exactly the right signal for us,” she said. “His exit makes sense.”

Perty rejected Lucke's claims that she represented a reactionary right-wing trend, saying she found it “overbearing that he tries to place those who are left in the AfD in the anti-bourgeois camp.”

She added that she believed Lucke was preparing the ground to found a new party.

Even before Lucke announced his exit from the party, his fall from the top of the pile had led to a flood for the exit gates.

In Bremen three of the four AfD politicians in the town hall announced their decision to hand in their membership.

Meanwhile 600 of the party's 21,000 members have also given up their party membership cards since the weekend.

Lucke set up the AfD in 2013 along with a handful of conservative economists, aiming to give a voice to voters opposed to the European single currency.

In May Lucke had tried to a last-ditch attempt to redirect the AfD back towards its more neo-liberal roots by setting up an organisation called 'wake-up call 2015' and claiming that the party was in danger of turning into the French National Front.