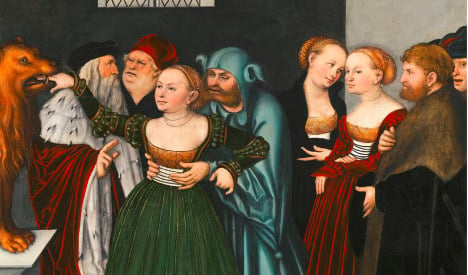 The painting, known as “The Mouth of Truth” or “The Adulteress” in English, was painted between 1525 and 1528 and depicts a woman placing her hand in the mouth of a lion statue in a test to determine whether she's telling the truth.

“This is a very well-known painting, which has only changed hands once in recent decades,” Benjamin Spira, co-curator of the Cranach exhibition at the Schloss Friedenstein Gotha Foundation told The Local.

“Old masters of this quality very rarely come onto the market, and that shows with this record price for Cranach – more than twice the previous price for one of his works.”

Sotheby's catalogue entry showed that the painting had most recently been exhibited in Frankfurt and Brussels at exhibitions in 2007-08 and 2010-11.

“It's always very interesting for potential buyers if a painting has been displayed in public and researched thoroughly,” Spira noted.

The subject of the painting refers to a stone mask of an ancient river God that stands in the porch of the Basilica Santa Maria in Cosmedin, Rome.

It was said that anyone who did not speak the truth while their hand was in the statue's mouth would lose it. Cranach's painting depicts the story of an accused adulteress who came up with a plan to dupe her judges.

In the tale, she had her lover dress up as a fool, and told him to touch her at the moment she placed her hand in the mouth of the statue, so that she could declare “I have never been touched by any man other than my husband and this fool here.”

Details visible in Cranach's version include the judges conferring on the left of the scene, the fool embracing the adulteress from behind and the husband dressed in black on the right.

The theme from ancient history was depicted several times in the Renaissance, Spira  said.

“Cranach may have been the first painter north of the Alps to paint it,” he added. But Bloomberg reported that despite the work overshooting its asking price, it fell well short of contemporary artists such as Takashi Murakami and Damien Hirst, who continue to dominate the market at the moment.