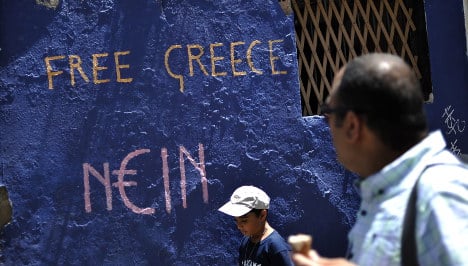 “The application [to the European Stability Mechanism (ESM)] must contain exact representations of what reforms Greece will set into motion,” Finance Ministry spokesman Martin Jäger said in Berlin.

“This application must be comprehensive. It won't be enough to write a letter and use it to make known that Greece wants an ESM programme.”

Meanwhile, Greek Prime Minister Alexis Tsipras used a speech to the European Parliament on Wednesday morning to make a final plea for debt relief for his country, hours after a meeting of eurozone heads of government failed to reach a new deal.“We all want an agreement that will bring a final end to the crisis,” Tsipras said.

“But the burden has to fall on those who can pay, not those who have paid already.”

Tsipras charged that most of the money given to Greece in financial aid programmes had immediately flowed out of state coffers to banks, rather than going to the Greek people.

He said that there must be “no taboos” in talking about debt relief – writing down the value of what Greece owes to its creditors the International Monetary Fund, European Central Bank and other eurozone countries.

That will sit badly in Germany, after Finance Minister Wolfgang Schäuble ruled out any debt writedown on Tuesday, saying that it ran counter to European treaties.

Tsipras added that his country needed the time and space to deal with “vested interests” inside Greece which have frustrated past attempts at reform.

His speech was welcomed by the far-right eurosceptics in the chamber and far-left anti-austerity parties in equal measure, while centre-right politicians didn't join in the applause.

Tsipras concludes his speech. Centre-right MEPs are sitting on their hands. Standing ovation from far-left and far-right/eurosceptics.

Merkel 'not very optimistic' for Greece

A visibly disappointed Chancellor Angela Merkel had said after a four-hour eurozone leaders' meeting on Tuesday night that “you see me here not very optimistic. The situation is comparatively serious.” She warned the Greek government that “there must be more [in their proposals] than was in the proposals from the three institutions” two weeks ago.

Merkel's comments came after she and French President Francois Hollande had spoken with Greek Prime Minister Alexis Tsipras privately as well as attending the full heads of government meeting.

“The final deadline runs out this week,” European Council President Donald Tusk said after the meeting, the Süddeutsche Zeitung reported.

“Unfortunately we can't rule out a dark scenario,” said Turk – meaning the exit of Greece from the currency union.

Greece's government must offer a new package of reform proposals by Thursday in advance of a meeting of eurozone finance ministers on Saturday and the full leaders' summit on Sunday.

Merkel added that there was little prospect of short-term 'bridge financing' to get Greece any further than the deadline at the end of this week.

European Commission President Jean-Claude Juncker added that he was prepared for the worst-case scenario of Greece exiting the euro.

“We have developed a Grexit scenario in detail,” he said, adding that there were also plans to supply humanitarian aid to the Greek people.