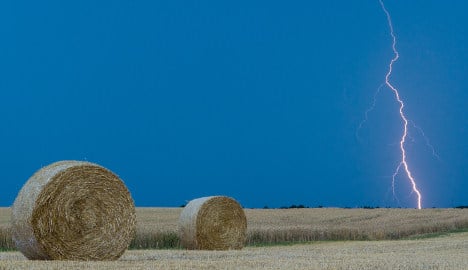 As the Mercury rose once again during the day on Tuesday, with temperatures climbing into the high thirties in the south west, electrical storms followed in the evening rising up from the south to cover the rest of the country.

Framersheim in Rhineland-Palatinate, a town of 1,600 people, was struck by a tornado on Tuesday evening. The storm ripped the roofs off several houses, reports the Süddeustche Zeitung (SZ), which estimates costs at between €8-10 million.

The interior minister of Rhineland-Palatinate told SZ that up to 100 houses were damaged by the tornado.

Deutsche Bahn has announced that rail lines have taken some damage as trees and branches were been blown onto the electrical lines by high winds.

In Hessisch Lichtenau in Hesse a lightning strike on an apartment block caused €150,000 in damages.

Three electricity masts were brought down by the wind in Mansfelder in Saxony-Anhalt, leading to 1,800 households going without electricity.

In Kelbra fist-sized hail stones damaged the roofs of garages and flooded streets. Around 400 firemen had to be deployed.

In Bavaria hurricane force winds and torrential rain led to the fire services being called out 53 times.