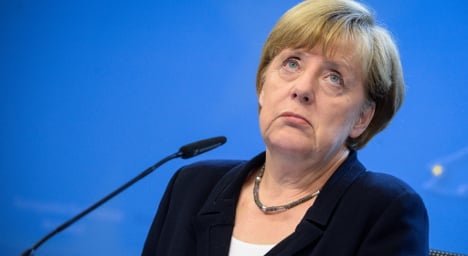 The austerity champion often dubbed the “Queen of Europe” now faces the toughest crisis in her nearly decade-long reign at the helm of the EU's top economy.

So far she has refused to blink, ruling out a Greek debt “haircut” and insisting the desperate yet defiant country accept more tough reforms and cost cuts in return for international aid.

But many observers warn that if the high-stakes standoff is not resolved, both sides would lose.

“It is a mistake to think it would be in Germany's interest to break off negotiations and actively push Greece into a Grexit,” said Marcel Fratzscher, head of economic research institute DIW.

“Germany would pay a heavy political price” if Greece crashes out of the eurozone, he said. “The accusations have already escalated in recent months. Europe and the world would primarily see a Grexit as a failure of German policy.”

Daniela Schwarzer, of think-tank the German Marshall Fund of the United States, said Merkel “faces a huge dilemma because, on the one hand, if Greece leaves, she will be the chancellor who didn't manage to hold the eurozone together”.

“But if she keeps Greece in after all that has happened, then she will be extremely criticised for giving up the principles that govern the eurozone. Whichever way this goes, she will be criticised.”

At home, Merkel has long enjoyed soaring popularity ratings for her firm grip on the public purse of Europe's effective bailout paymaster and for preaching the virtues of fiscal rectitude.

Abroad, many have warned that Merkel's bitter medicine is killing the Greek patient, by plunging it deeper into recession and unemployment when, they argue, an injection of stimulus spending is badly needed. “History will remember you for your actions this week,” five renowned economists including Thomas Piketty and Jeffrey Sachs wrote Tuesday in an open letter to Merkel, calling for a “a humane rethink of the punitive and failed programme of austerity”.

Until now, she has stuck to her guns. She insisted Tuesday that so far there was “no basis for negotiations” with Athens, and repeated that “European solidarity and national reform efforts go hand in hand”.

At home, conservative lawmakers and newspapers have warned Merkel not to give in now, as anger with Greece has come to cross mainstream party lines and polls show about half of Germans favour a Grexit.

The mass-circulation Bild daily this week urged Merkel to be “an Iron Chancellor” in her dealings with Greece, depicting her with a Prussian spiked military helmet.

On Wednesday the tabloid-style newspaper was furious EU leaders were even considering a third bailout and fumed: “NO, we are not consistent. YES, we are open to blackmail. What a defeat!”

News magazine Der Spiegel meanwhile warned that Merkel – heir to chancellor Helmut Kohl, a champion of European unity – could become the leader on whose watch Europe started to crumble.

Its stark cover shows Merkel sitting on toppled Greek columns, with the headline “The Rubble Woman”, referring to the iconic survivors who cleared up bombed German cities after the Second World War.

It argued that much of the blame for the crisis goes to Greece, but also to Merkel's “particular way of letting things drift along”.

“The Greek crisis called for leadership, a plan, but Merkel did not want to commit to one. Merkel likes power, but at the crucial moment, she doesn't know what to do with it. Now she faces the ruins of her policy on Europe.”

Especially outside Europe, many wonder how a divided continent will deal with other challenges – from the Ukraine crisis to dealing with a wave of refugees to the looming threat of Britain leaving the EU.

As Berlin has taken an increasingly central role in Europe, many are warning it must not fail now.

“The government has acted responsibly and correctly in the negotiations of recent months,” said Fratzscher. But if Greece does exit the euro, he said, “this would be no more than a historical footnote”.