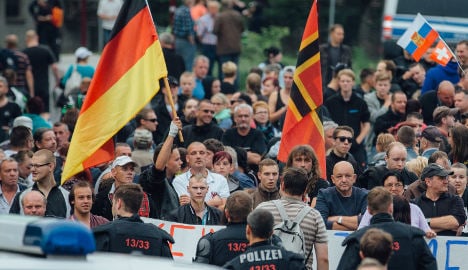 Demonstrators outside the Freital refugee home are held back by police on June 26th. Photo: DPA

Markus Ulbig, interior minister of Saxony, said that he was disappointed by the people who shouted down pro-refugee voices at the meeting.

“Success doesn't look like this, but the event was important,” he said – although he admitted that conversation was impossible with the people who are opposed to hosting refugees.

Freital has become a symbol in recent weeks for widespread discontent and incomprehension that Germany places so many refugees among communities in less-well-off areas of the country.

Although the Pegida movement's mass demonstrations in central Dresden petered out some months ago – and their mayoral candidate failed to connect with more than a small minority – that hasn't dissipated anti-immigrant and anti-asylum feeling around the city.

Protests began even before the meeting got underway as the hall was closed due to overcrowding.

Large numbers of people stood outside and angrily demanded to be let in, calming down only when a few more people were allowed to enter and authorities promised another meeting in future.

As Ulbig began explaining the state of refugee accommodation in Saxony, he was shouted down. People on the floor said that politicians were lying to them and that asylum seekers would disturb the peace in their town.

“They just cause filth and rubbish and throw everything out of the window,” one local woman said.

Another member of the public said they were unable to rest at night without sleeping tablets because of noise.

Money was “being wasted for asylum seekers” and not spent on building kindergartens or school upkeep, they claimed.

But while the anti-refugee members of the crowd expressed themselves freely, they angrily shouted “shut your mouth” at anyone who criticised the demonstrations outside the town's refugee home, whose recent enlargement has prompted a new round of protest.

Around 100 pro-asylum demonstrators faced off against the anti-asylum crowd outside the hall and were attacked a number of times.