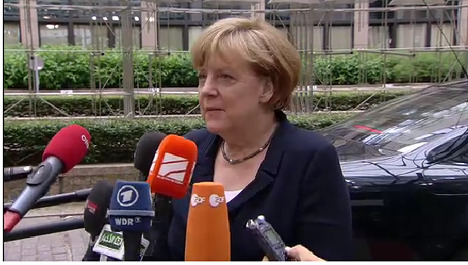 Sticking to well-worn turns of phrase that she's employed throughout the Greece crisis of recent weeks, Merkel insisted that “there is still no basis for us to start negotiations for an aid programme in the ESM [European Stability Mechanism] framework.”

She added that “solidarity on the European level and responsibility on the national level go together.

“It's not about weeks now, but a few days, and we're here today to hear what the Greek Prime Minister has to say to us.”

Eurozone leaders may be kept waiting a little longer, after it emerged that Greek PM Alexis Tsipras will address MEPs in the European Parliament chamber on Wednesday.

News of Tsipras' move followed reports that Greece's new finance minister Euclid Tsakolotos, who replaced Yanis Varoufakis on Monday, failed to make any new proposals to fellow eurozone finance chiefs at an afternoon meeting in Brussels, although he was reported to have given a “good presentation” to his counterparts.

May not have submitted written proposals, but Greek FinMin made a “good presentation” at the #Eurogroup meeting – source tells me #Greece

“Obviously the EU has all its obligations to Greece. But we are waiting tensely for the Greek government's decision.”

Schäuble said that “we respect” that the Syriza government led by Alexis Tsipras had “successfully fought on the basis of not wanting a programme” in the weekend referendum that saw Greek voters reject previous conditions for more financial aid.

But he added that “without a programme [of reforms in return for financial aid] there is no possibility within the Eurozone to help Greece.”

Chancellor Angela Merkel is expected in Brussels for a meeting with other eurozone leaders to start at 6 pm.

Germany and France on Monday called on Greece to make detailed proposals to revive bailout talks, a day after Greek voters defiantly rejected creditors' demands for further austerity, plunging Europe into crisis.With Greece's economy gasping for air, the authorities extended an eight-day bank closure until Thursday amid fears cash machines in the country were running dry.

The European Central Bank, which has been keeping Greek lenders afloat, meanwhile announced it would maintain a key financial lifeline to Greek banks, but raised the bar for them to access the emergency funds.

Chancellor Angela Merkel said the conditions for a new Greek rescue package “have not yet been met” following crisis talks with French President Francois Hollande in Paris.

DON'T MISS: How Germany will respond to the Greece referendum

“And that is why we are now waiting for very precise proposals from the Greek prime minister, a programme that will allow Greece to return to prosperity,” said Merkel, adding that eurozone countries had already shown “a lot of solidarity with Greece”.

The Chancellor was under pressure on Tuesday, with many voices in the domestic media and her own parliamentary bloc calling for her to usher Greece out of the Euro.

“For us that means no to further negotiations and no to an aid package.”

Germany's top-selling tabloid Bild used its front page to declare that “today we need the Iron Chancellor” – the nickname of Otto von Bismarck – and calling on Merkel to be tough and gently but firmly push for Grexit – if necessary with a debt writedown and humanitarian aid for the Greek people.

“It is now up to the government of Alexis Tsipras to make serious, credible proposals so that this willingness to stay in the eurozone can translate into a lasting programme.”

Premier Tsipras is to unveil his government's proposals on Tuesday at a hastily-arranged emergency summit of the 19 eurozone countries in Brussels.

As Athens awoke after a night of celebration after the 'No' camp won a closely-watched referendum on bailout terms, Greece's firebrand finance minister, Yanis Varoufakis, announced he was stepping down to try to ease friction with creditors.

Varoufakis had infuriated European counterparts by lashing demands for economic reform and welfare cuts as “terrorism” and “fiscal waterboarding.”

He was replaced by Euclid Tsakalotos, a much more discreet junior foreign minister and economist who has been Greece's pointman in the negotiations with creditors.

“We want to continue the discussion,” said Tsakalotos, who admitted to having “stage fright” upon assuming the post “not at the easiest moment in Greek history”.

The White House urged all parties to seek a compromise that would keep Greece in the euro zone and place its economy “on a path toward debt sustainability but also economic growth.”

Positions among Greece's 18 partners in the eurozone vary ahead of Tuesday's summit.

Germany, Finland, Slovakia and the Baltic states have taken a notably harder line, whereas France, Italy and Spain have adopted a more conciliatory tone.

Despite its tougher approach on debt relief, Germany said Monday eurozone leaders should discuss humanitarian aid for a country fatigued by years of belt-tightening and chronic unemployment.

In Sunday's plebiscite, Greek voters voted by 61.31 percent to 38.69 percent to reject austerity terms in exchange for releasing more funds under an international bailout package.

The result dealt a body blow to the vision of European integration, but elated parties campaigning against austerity and loss of national sovereignty.

Many Athenians awoke Monday yet again to the grim reality of closed banks and more lines at cash machines to make their daily withdrawal limit of €60, as fears grew the ATMs could soon run dry.

“I'm very afraid we will get no cash anymore in the coming days. They really have to fix it, end of this week at the latest, otherwise it (the economy) is collapsing,” said pharmacist Lambros Vritios.

In Frankfurt, the ECB said its governing council had decided to maintain emergency funding to Greek banks — so-called Emergency Liquidity Assistance (ELA) — at the level set on June 26, keeping it at roughly 89 billion euros.

But it noted that the financial support can only be provided against sufficient collateral.

“In this context, the Governing Council decided today to adjust the haircuts on collateral accepted by the Bank of Greece for ELA,” the statement said, a move that will make it more difficult to access ELA funds in the future.

Late on Monday, a Greek government source said Tsipras had spoken to ECB chief Mario Draghi to stress that Greek banks, closed last week to prevent a run on deposits, needed to reopen with assistance from the Frankfurt-based
lender.

Tsipras also spoke to IMF chief Christine Lagarde “on the need to find a viable solution dealing with the real problems of the Greek economy,” the source said.

Greece last week defaulted on a €1.5 billion repayment to the International Monetary Fund but Lagarde said her organisation was “ready to assist Greece if requested to do so”.

Market reactions to the referendum were mostly muted, suggesting limited contagion from a possible “Grexit”, or Greece's exit from the eurozone.

More than three-quarters of Greeks want to stay in the eurozone, according to surveys, but analysts are now putting the chances of a Grexit at “very high”.

Tsipras, 40, insists that instead of Grexit, the creditors will now finally have to talk about restructuring Greece's massive €240 billion euro debt to them.

The last EU-IMF bailout for Greece expired last Tuesday, despite Tsipras's appeals for it to be extended.

Greece was officially declared in default on Friday by the European Financial Stability Facility, which holds €144.6 billion of Greek loans.