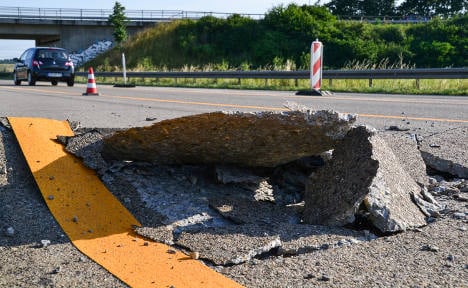 A fissure on the Autobahn near Heidelberg. Photo: DPA

The danger posed by the ruptures has set alarm bells ringing in the transport ministry which has set up a team to keep an eye on at-risk areas.

On Thursday afternoon a section of the Autobahn in Baden Württemberg had to be sectioned off after the concrete under the lane markers broke apart, reports der Spiegel.

Trucks can cause fissures in the lanes which then pose a particular danger to motorbike riders, the weekly notes. The German Automobile Association (ADAC) has warned that in the area around Berlin there is a danger of bumps appearing in the roads.

“Car drivers and bikers who notice these elevations too late are at real risk of losing control of their vehicles,” an ADAC spokesperson told Spiegel.

The transport ministry has already imposed speed limits on particularly exposed sections of the Autobahn such as the A3 next to Regensburg.