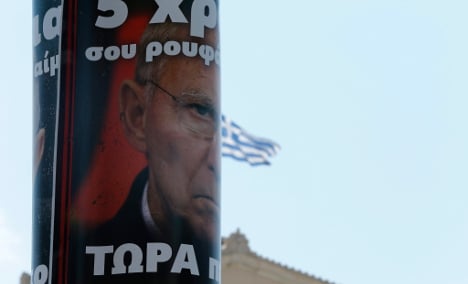 A poster of German Finance Minister Wolfgang Schäuble in Athens reads "For five years he has sucked your blood. Now tell him NO." Photo: DPA

Any new bailout would have to be negotiated “on a completely new basis and under toughened economic preconditions,” Schäuble told Bild.

“The suggestion the government wants to have people vote on is no longer on the table,” he added.

“We must wait and see how the government in Athens reacts to the result, what consequences that has. And then the Greeks can make an application to take up talks.”

Schäuble added that he would not be able to join other eurozone finance ministers in negotiating a new bailout for Greece without the agreement of the Bundestag (German parliament).

A poll for Handelsblatt business newspaper showed that a majority of Germans supported Schäuble's stance.

Should Greece get debt relief? 62 percent of Germans polled for @Handelsblatt said “no.” pic.twitter.com/tGbEFBam55

Schäuble's spokesman Martin Jäger had earlier said that figures released by the International Monetary Fund on Greece's critical financing needs “by no means” automatically necessitate restructuring of its huge debt.

Despite IMF data published on Thursday that painted a grim overall fiscal picture, “by no means can one deduce that a debt restructure is imperatively required,” Jäger said.

Greek Prime Minister Alexis Tsipras called on Friday for the IMF's recommendations to be implemented by his country's creditors.

Per the IMF, the only way #Greece's debt can be sustainable is with a 30% haircut & a 20 year grace period. #Greferendum #dimopsifisma #OXI

Days before Greeks vote in a referendum on whether to accept its bailout terms, the IMF said the country needed €50 billion over the next three years, including 36 billion euros more from European Union lenders.

The report on Greece's finances highlighted a deterioration since Prime Minister Alexis Tsipras and his anti-austerity Syriza party took power at the beginning of 2015.

Berlin, which would have to approve any further aid to Athens in the Bundestag lower house of parliament, still believes that Greece needs to resolve its problems through economic structural reforms, Jäger told reporters.