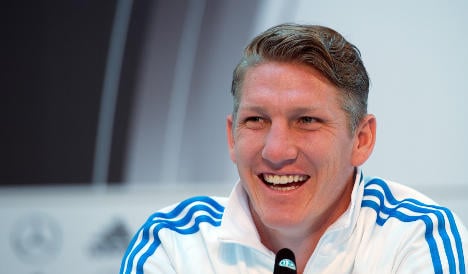 The 30-year-old Germany captain has a year left on his Bayern contract and reports in the British media claim Louis van Gaal's United are set to swoop for the defensive midfielder, who has spent 13 seasons with the Bavarians.

But Schweinsteiger has said he wants to help Bayern become the first team to win four straight German league titles in the history of the Bundesliga next season and Guardiola hopes the Munich vice-captain stays.

“I have already said, read and heard a lot of things about Basti, but his future depends on him,” said Guardiola in Thursday's press conference.

“I think he will stay, but only he can decide.

“If he stays, that would be the perfect decision for me. He is a top player.”

In the other direction from Manchester, United's Argentina international Angel Di Maria has been linked to Bayern and Guardiola stayed vague on the subject.

“It's the decision of the club, I just worry about myself,” said Guardiola, who quipped that he most wants “a squad of fit players” for next season.

“Basically, nothing is excluded,” said Sammer when asked about Schweinsteiger in a press conference as Bayern announced the signing of Brazil forward Douglas Costa.

“It's a crazy world.

“He has clearly expressed that he is an important part of the team, but let's see. We're still waiting.”

With Franck Ribery still stranded on the sidelines with an ankle injury, Guardiola says he just wants all his stars available.

“I'd like to have Javi Martinez fit, Arjen Robben fit and Franck Ribery fit, then we can play our best system. I already have an outstanding team,” he added with 14 midfield players listed in a bulging, star-studded squad.

With both Robben and Ribery having missed large chunks of last season through injury, Bayern completed the signing of Brazil winger Douglas Costa from Shakhtar Donetsk on Wednesday and Guardiola explained why.

“We need a player for the one-on-one situations,” said Guardiola after Bayern paid €30 million euros for the Selecao star.

“We have two exceptional players (in Robben and Ribery), but he (Costa) is young.

“He has already played four or five years in the Champions League and is a fighter.

“I hope he will integrate himself quickly, which shouldn't be a problem.”

Bayern began their pre-season training on Wednesday with a host of stars such as Schweinsteiger and Germany colleagues Thomas Müller and Manuel Neuer absent on holiday until the squad is presented on July 11.

Munich open the new season at home to Hamburg on August 14 having won the German league for the last three years.