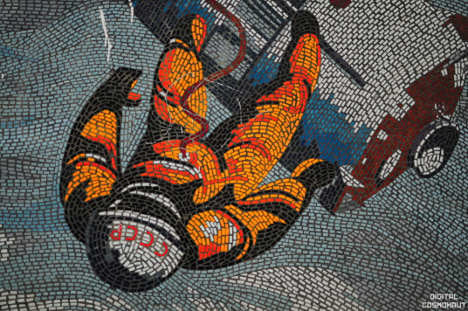 Although his family hails from near Würzburg, northern Bavaria, Georg – alias Digital Cosmonaut (DC) – spent many of his young years abroad, following his diplomat father around postings in eastern Europe and southeast Asia.

He was in the West German embassy in Prague in the final days before the Berlin Wall came down, as East Germans flocked to the Czech capital to board “freedom trains” to the West.

Many of his father's photos have become part of the official record, as he donated all his negatives to the state archives after the events.

The fascination for photography – also passed down from a grandfather who owned a photography supplies shop – was awakened in Georg, too, who has made it his creative outlet outside a gruelling work routine.

The Local met him at a central Berlin coffee shop and found a quiet, neatly-dressed 30-something who would be difficult to pick out in a Berlin crowd – perhaps an advantage for slipping quietly in and out of places that are technically off-limits.

“Photography's always been in my family,” he explained. “I actually studied photography at university, but now it's more of an extended hobby.”

A blog could lead you anywhere

That hobby, though, led him from posting a photo per day on his blog to producing extended photo essays about his adopted city and its surrounding area.

“I started out with DC as purely a photography blog about 6 years ago,” he remembered, “just to keep me busy, keep me occupied, cause I was doing this boring office job and needed an outlet.”

Used to exploring the cities and ruins of southeast Asia with his camera – “I've been doing this since before I knew what the name was for it” – Georg soon turned to urban exploration to provide him with fresh new locations and material for his hungry lens.

“It was by random off-chance that I spotted Krampnitz, the Soviet military base south of Potsdam that used to be German – same with every base around Berlin. That was the first place I visited.”

Krampnitz isn't urban exploring's best-kept secret, but it offers a glimpse into layers of German history from the Second World War to 1989.

Odds and ends of daily life lie among rooms where stripped paint might reveal Russian graffiti scrawled as Soviet troops occupied the base, or where the ceiling might boast a lovingly-created mosaic medallion that once held an officers' club chandelier. A ceiling medallion that once held a chandelier in the former Soviet base at Krampnitz. Photo: Digital Cosmonaut

Under the heading of “Urban exploring“, he's shared photos from dozens of trips to such softly decaying ruins – from bathhouses and breweries to airports and sanatoria.

But that's something he's stopped doing – or at least posting in public.

“I'm not too big a fan of this kind of thing, and the German community, wow, they aren't either.”

A melancholy view of a long-since silenced piano in an abandoned villa near Berlin. Photo: Digital Cosmonaut

Caught between two fires – the German urban explorers unhappy that their haunts are being unearthed by all and sundry, and “fans” on his blog irately demanding detailed information on how to find the locations he posted, Georg decided to cut off the flow.

“People get hyper-aggressive when you don't tell them something.

“And I don't give out an address for a reason. Honestly, for one, finding out for yourself is part of the fun. And it attracts a lot of the wrong people.

“The abandoned swimming pool in Neukölln is a very good example. Suddenly you have two, three articles hyping it up and suddenly it burns down.

“When you see before and after pictures of what the place used to look like, even two years ago, it's totally smashed up. It's bound to happen anyway, but posting it online just accelerates the process.”

Now, he says, he only posts urban exploration photos to private forums rather than his public website.

'Nobody ever actually thinks'

And on the blog, Georg has moved on to documenting some of the remnants of the past that still litter Berlin but stand unnoticed as locals and visitors go about their bustling business.

“Nowadays people know me less for the urban exploring and more for the other random Berlin posts that go up. That's something I'm fine with.”

Just recently, he has began a project to document as many Nazi eagles remaining in the capital as he can find, discovering dozens in just a few weeks. A Nazi eagle still adorning a building in the Berlin suburb of Marzahn. Photo: DPA

Or there was the time when he was inspired to track down all the windmills still standing in Berlin.

“I'd actually passed the one in [northeastern suburb] Marzahn a million times on my bike,” he remembered. From there, following up the trail is just something that “kind of happens when you go into that Wikipedia mode… you get really too deep into it.”

Some of Georg's more recent work even has practical applications, as with a post that explains just what those yellow plastic boxes on traffic lights are actually for.

'I'm not doing it to make money'

What Georg's photography comes down to for him is producing something that's meaningful for him and worth following for his audience.

“It's nice, that appreciation, that sense of recognition,” he says. “Everybody likes that, there's no denying it.”

Often when he goes on an enforced break – such as when his wife makes it clear that she'd rather have him around at home during their precious free time than out tilting at windmills – it's his audience's enthusiasm that encourages him to pick up the camera again. A forgotten bust of Lenin emerging from the countryside. Photo: Digital Cosmonaut

His avid followers and the community that's sprung up around photographing Berlin's quirks and quiddities – sites like Slow Travel Berlin, Fotostrasse, or Endbahnhof – mean that there's always a burgeoning online conversation to jump into whenever he's ready.

As for what the next frontier in Berlin photography might be? Georg agrees that while there's plenty of imagery of urban decay and historical leftovers, there's little conversation going on in English around documenting the people of the city.

One recent success story is What Ali Wore, a blog of a colourfully-dressed Turkish gentleman in Kreuzberg started by an Australian expat.

“Engaging with the people around you is harder to do if you don't speak the language,” he pointed out.

“But what's there to be afraid of? There's always the myth that Berliners are unfriendly, and that's something I've never found to be true.

“You need to trust in yourself and trust in people, dare yourself to actually engage.”

Maybe that suggestion will push someone to start a new project all of their own.