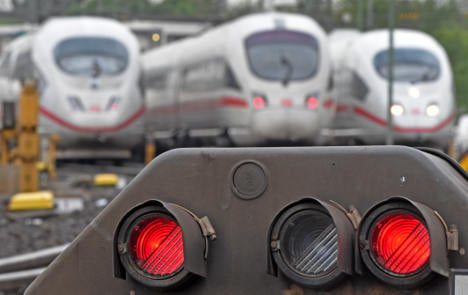 The rail strikes which have brought unprecedented travel disruption to Germany over the last nine months are now over, after the two sides announced at a press conference on Wednesday morning that they have signed a series of agreements on salaries, work hours and overtime.

“They were very intense negotiations,” commented Matthias Platzeck of the Social Democratic Party (SPD), who along with Bodow Ramelow of Die Linke meditated the conflict over the last five weeks.

“I've participated in discussions in Moscow during this time. And although talks with the Russians are tough, these were even more difficult,” he commented wryly.

The strikes began in October and built up to a six-day walkout at the beginning of May, the longest train strike in modern German history.

Drivers often targeted strikes at bank holiday weekends, leaving holiday makers' travel plans in chaos and leading to costs for DB and its freight customers in the millions of Euros.

Ramelow said that “although I have long experience working on union-employer disputes, I have never been involved in anything quite like this. We sat together as mediators, union and company for a total of 75 hours – and that's not to mention the time spent in one-on-one talks.”

Agreement was reached on how to deal with the main point of contention in the dispute, resolving by 2017 over a million hours of overtime that members of the GDL have accrued, Ramelow announced.

Further agreement included an immediate 3.5 percent increase in wages and a commitment by DB to flexible working hours between 35 and 40 hours per week, the Thuringian minister-president added.

GDL boss Claus Weselsky thanked the customers of DB for the fact that “over 50 percent of them remained supportive of our goals” during the strikes.

He also noted that the two parties committed themselves to working together until 2020 regardless of a potential new law which would give all negotiating powers to the largest union in a specific sector.

Ulrich Weber, chief human resources officer at DB said “thank God we have reached an agreement which can give customers confidence in Deutsche Bahn again”.

“The contract commits us to seeking mediation before a problem arises, so hopefully this type of conflict will not occur again,” he said.