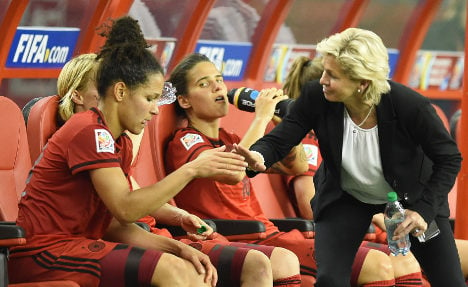 The match was tied on 0-0 when in the 60th minute Germany's Celia Sasic, the tournament's top scorer with six goals, missed a penalty kick.

The penalty was awarded by Romanian referee Teodora Albon when US defender Julie Johnston pulled down Alexandra Popp in the box, an offence for which she should have been sent off.

“The rule says yes but she didn't get a red card,” said a resigned Neid, who was also unhappy about a penalty awarded against them.

Defender Annike Krahn brought down US forward Alex Morgan in a tackle outside the penalty area.

Carli Lloyd scored the opener for the US on 69 minutes off the penalty and six minutes from time Kelley O'Hara had doubled their advantage.

“It was clearly outside of the area and it can be seen quite clearly on television,” said Neid.

US coach Jill Ellis was terse when questioned.

“I think it's just a part of the game in terms of the officials, so whether I'm on the receiving end or the other end it's not something I usually comment or criticize.”

In the end Germany lost 2-0 after Kelly O'Hara fired in a winner with minutes to go.

As the Americans prepare for their second straight final on Sunday in Vancouver against either champions Japan or England, Germany prepare to play the loser in Edmonton on Saturday.

“We have to get over it fast. We want to have a nice conclusion to this tournament, take the third place and return home with our heads held high,” said the 51-year-old Neid, who is stepping down after the tournament.

“We are among the best four teams in the world. Maybe it depended on the penalty, maybe not. This team has given everything they have today, it wasn't enough.”

“We're going to have to support Celia,” Neid added.

“She shot two penalties against France. Today she missed. That type of thing happens in sport. She will have gotten over that by Saturday.”

Neid has either coached or co-coached Germany to World Cup wins in 2003 and 2007, as well as five European titles, and held her job despite Germany's shock exit in the quarter-finals from the 2011 World Cup at home.

Her next post will be the German Football Association's (DFB) head of scouting for women and girls and she will be replaced as coach by former midfielder Steffi Jones.

“I think it will have a positive effect, you can't walk through life winning every match,” she said.

“It's always good if you have to overcome a defeat because you can develop further. And I'm confident the players will do that. I'm absolutely certain they will develop.”