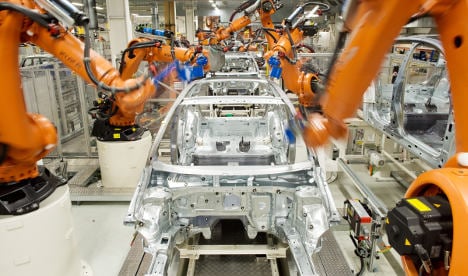 A photo of a Volkswagen assembly line, not related to the incident. Photo: DPA.

The incident occurred on Monday as a Volkswagen factory in Baunatal, Hesse, when the 21-year-old man from another company was working on assembling the robot for a new electric motor production line.

When the robot started up, it grabbed the man and thrust him against a metal slab. The employee, from a company from Meissen in Saxony, suffered severe contusions in his chest area. He was resuscitated at the scene, but then died at the hospital.
Local newspaper Hessische/Niedersächsische Allgemeine (HNA) reported that the man had been standing within the production area with the robot while others were standing in the outer area.
The robot had been the property of the Meissen-based firm for whom the man worked and the machine had not yet been handed over to Volkswagen, the car company told reporters.
Local authorities are now investigating how the death occurred, according to HNA.