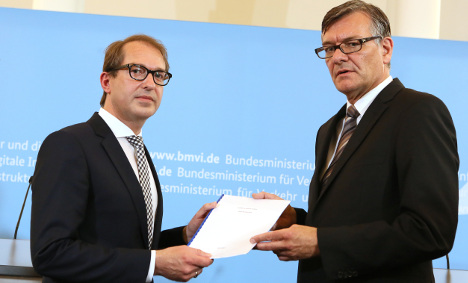 Dobrindt explained that a working group of experts is focusing on improving drop-in centres for airline employees suffering from mental illness, and will look into better monitoring workers’ intake of medication, drugs and alcohol.

“Depression is widespread, and in most cases easily cured,” Dobrindt said at the presentation in Berlin.

The minister also said it would be important for doctors, psychologists and supervisors to be able receive an overview of someone’s medical history, which is currently encrypted to authorities, but the group must examine whether this would violate privacy laws.

A new working group will also analyze the possibility of conducting random checks on pilots, similar to the US model.

Germanwings co-pilot Andreas Lubitz had sought treatment for mental illness for years before investigators say he locked the senior pilot out of the cockpit, refused to let him in and steered the plane into the French Alps, killing all 150 onboard on March 24th, French prosecutors allege.

Lubitz had also searched for information online about cockpit door security before the flight between Barcelona and Düsseldorf, according to investigators.

Dobrindt had tasked his working group with examining ways to avoid such an event in the future.

Many raised questions following the crash about the airline’s policy of allowing just one pilot to be in the cockpit, arguing that Lubitz had been able to start the plane on its dangerous course only because his partner went to the bathroom.

According to prosecutors, when the pilot tried to return to the cockpit and found it locked, he entered a code to open it, but Lubitz was able to override the code and prevent him from entering.

Just days after the crash, the Federation of the German Air Travel Industry announced that it would implement a “four-eye rule”, similar to that were already in place in countries like the United States, where two people must be in the cockpit at all times.

But despite concerns about the security mechanisms of the cockpit door, which allowed Lubitz to lock the other pilot out, Dobrindt said on Tuesday that officials would not change the door policy, explaining that such security measures prevent hijackers from getting in.

Lufthansa also announced on Tuesday that it would offer an additional €25,000 for emotional damage to family members of those killed in the crash, on top of the €50,000 paid in immediate financial assistance.