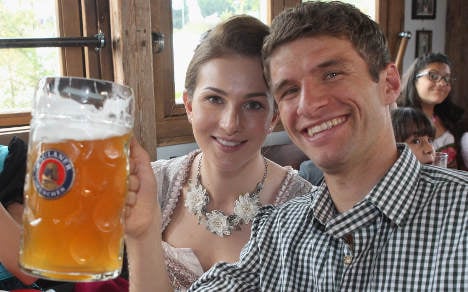 For those who love späti (late night store) culture, the news might come as no surprise. But buying a beer from a supermarket in Germany is extremely cheap in comparison with most of Europe.

The Local analyzed the information for Europe and found that there are few better places to have a cheap beer than in some of Germany's major metropoles.

While in London a bottle of beer sold across the counter will set you back €1.51, in Berlin the gold stuff will cost you less than half at €0.71.

While the 'poor but sexy' capital is clearly Germany's best spot to buy a cheap brew, Frankfurt and Munich also offer prices well below the European average at €0.74 and €0.81, respectively.

In the European cities surveyed, the overall average for a bottle of beer was €1.05.

But Germans will still be looking with envy at Spain. In Sevilla you only need to put down €0.46 – a price level that is almost matched across the Iberian peninsula.

Given the low cost of beer in Germany, it should come as no surprise that many a Teuton is saying 'Noch eins bitte!' (one more please!), perhaps a little more than they should.

Germany was slugging (or glugging) up there with the bigger hitters of eastern Europe on this scale, leaving countries like the United Kingdom which traditionally like a sly bevy in its wake.

The average adult in Germany is likely to sink 118 litres of beer in a year, well above the European average of 88.

According to figures released by the federal government's drug agency in January, 9.5 million Germans consume alcohol at a level dangerous to their health and 1.3 million of these are dependent on alcohol.

But there is still work to be done if the Bundesrepublik wants to catch up with Romania, where it's perfectly ordinary to drink 133 litres of beer in a year.

In the United Kingdom meanwhile, the average person only consumes 79 litres a year. Although if Germans had to drink Carling every day, maybe their drinking habits would change, too.

In terms of how much of their pay package Germans are prepared to dish out on Flaschen (bottles) of brewed barley, the results showed them making significant sacrifices.

The average European will spend €701 per year buying beer. While there are clear outliers such as the conservative Muslim population of Istanbul and the wine sipping southerners, Germany can still surely reflect with pride on having major cities in which everyone is drinking a hefty portion of their pay cheque away.

In Frankfurt the average person will spend €1,008 over the course of the four seasons to cool his throat.

Admittedly this is not as much as in Helsinki. The residents of Finland's capital spend €1,378 yearly on the foamy brew, but this high number can be explained by how dear beer is in the northern country.

But again, Romania stands out for its dedication to getting legless. Despite Bucharest being home to some of the cheapest beer in Europe – and having one of the lowest GDPs on the continent – the average person still says bye-bye to over €1,000 per year in the name of a bit of merriment and a few soar heads.