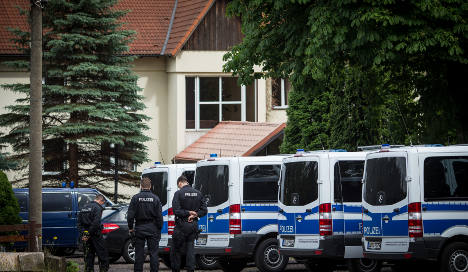 According to police the fire was started with the help of a fire accelerant in two separate places.

The owned of the property, meanwhile, has told of having received a threatening letter at the door of the building at the start of June, reports the Rheinische Post.

But when he reported the letter to the police they were not interested, he claimed.

The minister president of Saxony Stanislav Tillich of the Christian Democratic Union (CDU) described the incident as a “cowardly arson attack“ while visiting the burned home on Sunday.

He said he would do everything in his power to make sure the culprits were caught.

Over the weekend in nearby Freital right-wing demonstrators protested in front of a refugee home, reportedly chanting racist slogans.

The second fire broke out at a planned refugee home in Lübeck on Monday morning, reports Spiegel.

The police said in a press release that the damages amounted roughly one thousand euros. They are assuming that xenophobic motivations lie behind the attack.

Already this year a refugee home in Lübeck has been the subject of an arson attack and one man is currently standing trial, having admitted to carrying out the crime.

In April in Saxony-Anhalt, in an as yet unsolved crime, another home for refugees was burned down. Again the home was empty at the time and no injuries were caused.

Right-wing protesters occupied balconies at the headquarters of the Social Democratic Party (SPD) in Berlin and Hamburg on Sunday evening, protesting against Germany's immigration policy.

The activists from the 'identity movement' rolled out banners with messages such as “close the borders.“

In Hamburg the police confiscated the banners and took down the details of the offenders.

In Berlin the activists were already gone by the time the police arrived.

The identity movement, which originated in France, claims to fight against the islamization of Europe, against mass migration and against open border policies.