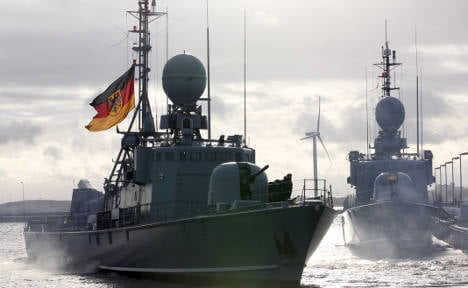 Photo: DPA
“I am speaking to all the allies. But as the biggest economy, Germany weighs more heavily than others,” Stoltenberg told the Süddeutsche Zeitung the day before the 60th anniversary celebrations of Germany's membership in the alliance on Tuesday.
“The USA spends four percent of GDP on defence, in Europe we're closer to one percent,” he said. “That isn't a fair distribution of the burden.”
Germany currently spends around 1.2 percent of GDP on its military, but will increase spending from €32.97 billion to €35.01 billion in the next four years.
But the country would have to increase spending to €58 billion to achieve two percent of GDP immediately – and it may be yet further from the target by the time the latest spending increases come into effect, as GDP will have grown by then.
At a Nato summit last year, members agreed to meet the two percent target within a decade.
Only five of the 27 members currently spend so much: the USA, UK, Greece, Poland and Estonia.